Validation of the vulnerable crotch on a side-to-side anastomosis: Observation of the burst process | springermedizin.at Skip to main content
SUCHE MENÜ 1 2 3 4

The vulnerability of the crotch on a side-to-side anastomosis to leak has been widely recognized. However, countermeasures to prevent leaks from the crotch have not proven to be sufficient.

A side-to-side anastomosis was performed between two intestinal specimens using a linear stapler. We analyzed the burst pressures of anastomoses. Comparison was made in five groups, with different staple heights, presence of Neoveil® (Gunze, Japan), with or without crotch buttressed with nylon. Using an endoscope inserted into the intestinal lumen, we observed the burst process.

We observed a significant difference in the resistance of the crotch to leak between the two types of reinforcement. In all experimental groups, the leak was observed not only on the serosal surface but also from within the lumen. Neoveil® significantly increased the burst pressure (41.4 ± 3.6 vs. 88.8 ± 14.6 mm Hg; p < 0.01). When reinforced with nylon suture, resistance to leak was recognized only in anastomoses with suture reinforcement from within the lumen. Observing from within the intestinal lumen, as the pressure increased, the intestine split along the length of the stapled anastomosis. A leak occurred when the split reached the center of the staple line. In the group using Neoveil® there was no obvious change in the Neoveil® itself with increases in pressure. In the group reinforced with nylon sutures, the crotch of the anastomosis expanded, and the intestine split, leading to a dehiscence and leak.

The efficacy of various crotch reinforcement methods both experimentally and clinically has thus far been in doubt. With our experiment, the mechanism by which leaks occur at the crotch has become clear, giving evidence for the optimal reinforcement method for stapled intestinal anastomoses.
Anzeige
Vorheriger Artikel Transanal total mesorectal excision in selected patients with “difficult pelvis”: a case–control study of “difficult” rectal cancer patients
Nächster Artikel Wound closing method with 2‑octyl cyanoacrylate after single-incision laparoscopic surgery for colorectal cancer 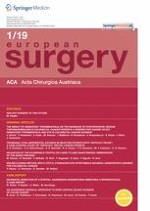