Use of biological disease modifying antirheumatic drugs in rheumatoid arthritis in Austria from 2008 to 2011 | springermedizin.at Skip to main content
SUCHE MENÜ 1 2 3 4

Rheumatoid arthritis (RA) is the most prevalent chronic inflammatory joint disease. On a national level in Austria, there are currently no data available on how often and which biological disease modifying antirheumatic drugs (bDMARDs) are prescribed in patients with RA. The aim of the present study was to explore prescription patterns of bDMARDs in RA in Austria with a focus on drug survival.

A retrospective data analysis of bDMARD courses of individual patients with RA that were extracted from the databases of nine Austrian health insurance funds covering 6.1 million (72%) insured people in a 4-year observation period from January 2008 to December 2011. Only patients with first prescriptions of bDMARDs were included. All patients with diagnoses other than RA were excluded.

Our analysis is based on the largest health care database available in Austria. Tocilizumab and abatacept showed the longest drug survival. Adalimumab, tocilizumab and etanercept were the most frequent DMARDs switched to. Of interest was the high number of bDMARD monotherapies.
Anzeige
Vorheriger Artikel Medical school education at the turning point?
Nächster Artikel Do doctors understand the test characteristics of lung cancer screening?

Titel
Use of biological disease modifying antirheumatic drugs in rheumatoid arthritis in Austria from 2008 to 2011
A retrospective analysis of 72% of the population
verfasst von
Tanja A. Stamm
Berthold Reichardt
Jochen Zwerina
Valentin Ritschl
Valerie Nell-Duxneuner 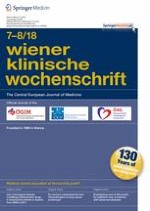