Ovarian lymphoma is a rare neoplasm and most commonly represents secondary ovarian involvement in overt systemic disease, usually of the non-Hodgkin’s type.

To report a case of acute abdomen caused by torquated large ovarian lymphoma.

We report the case of 65-year-old patient admitted to our hospital with signs and symptoms of acute abdomen. Findings were suggestive of left ovary torsion due to the neoplasm. After detorsion, mobilization, and adhesiolysis, a bilateral adnexectomy was performed. Histopathological and immunohistochemical analysis of the left ovarian tumor was performed and diagnosis of diffuse large B‑cell lymphoma (DLBCL) with a GCB (germinal center B‑cell-like) phenotype was made. Additional bone marrow biopsy and imaging techniques excluded other sites of involvement, confirming diagnosis of primary ovarian DLBCL. 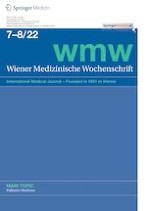