Fungal infections of the skin are a common condition, usually easy to diagnose and treat. When the infection is clinically mimicking another cutaneous disorder or when the clinical presentation is modified by the use of inappropriate treatment, it is referred to as tinea atypica or tinea incognito.
We report a series of nine cases of patients with tinea atypica, imitating and diagnosed initially as different skin diseases. Two patients were defined as pyoderma in the facial and pubic regions (caused respectively by Trichophyton mentagrophytes var. mentagrophytes and Microsporum canis) and one as herpes zoster ophthalmicus (caused by Trichophyton rubrum). Six additional patients were initially misdiagnosed: (1) Plaque-like formation of the skin misdiagnosed as an impetiginized eczema (with isolated agent Trichophyton verrucosum). (2) A rare form of skin infection of the hand caused by T. rubrum, imitating clinically cutaneous infection with tuberculum mulgentium. (3) Rosacea-like dermatitis with an isolated agent Fusarium. (4) A patient with the typical clinical symptoms of seborrheic dermatitis of the face (and with isolated T. rubrum as a causative agent). (5) Another patient presented with a widespread folliculitis by Trichophyton mentagrophytes. (6) In a patient with bullous pemphigoid and immunosuppression pemphigoid-like eruptions were caused by Malassezia pachydermatis and T. rubrum. The diagnosis in the presented cases was based on direct microscopic examination with KOH and a culture on Sabouraud agar.
After the diagnosis of tinea, treatment with topical and systemic antifungal agents was administrated, followed by complete clinical remissions in all cases.
The clinical manifestations of tinea atypica can mimic a large number of other dermatoses, which often leads to misdiagnosing, and as a consequence—to serious difficulties in the management of clinical symptoms and in offering appropriate therapy. 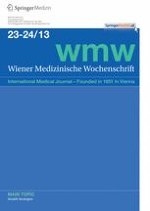 Are there differences in LDL-C target value attainment in Austrian federal states? Yes!