Results of medical college admission tests in Austria demonstrate the slightly worse performance of women, and are the basis for discussions around fairness and a basic science knowledge gap among female applicants.

The purpose of this article was to investigate a basic science knowledge gap among female candidates of the admission test at the Medical University of Graz, and to evaluate whether the point of time of taking the examination has an influence on the test results.

Observational investigations of the results of the admission test at the Medical University of Graz were performed. A total of 3405 applicants were included in the study. Statistical analyses were performed by routine methods.

Male Austrian applicants are invariably more successful than female Austrian applicants when they pass the admission test immediately after completing secondary education. When female as well as male candidates pass the admission test 1 year after completion of secondary education, the differences in the results are no longer statistically significant.

A basic science knowledge gap in the Austrian applicants can be confirmed. The variable time can be interpreted as an opportunity for the reduction of a basic science knowledge gap.
Anzeige
Vorheriger Artikel Complete rupture of the right upper lobe bronchus due to blunt thoracic trauma
Nächster Artikel Efficacy and tolerability of vildagliptin-based versus comparative dual therapy in type 2 diabetes 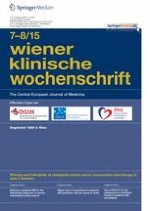 Epidemiology of suicide in Austria during 2000–2010: potential years of life lost: time for the national suicide prevention program