To assess whether the period between initial symptoms and therapy with ranibizumab in patients with choroidal neovascularization (CNV) influences visual outcome after a follow-up of 12 months.

The mean time span between initial symptoms and treatment was 66 ± 63 days. A longer duration of visual symptoms was significantly correlated with a lower BCVA at baseline, but also after 6 and 12 months.

Shorter duration of visual symptoms prior to treatment is associated with a better visual outcome. 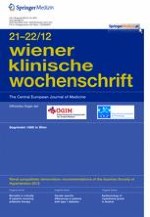