Pharmacological research confirms and supports the clinically observed antidepressant efficacy of St. John’s wort (Hypericum perforatum L., SJW). This contribution is an update of a former review by the authors in 2007. Positive evidence of antidepressant effects has been found with SJW preparations, extract fractions, and single constituents. The efficacy of SJW is obviously defined by a range of parallel mechanisms of action, triggered by different constituents. In vitro research showed, among other tests, positive effects in neurotransmitter regulation (in beta adrenergic systems and glutamate receptors) and ion channel conductance. Antidepressant effects were confirmed in typical in vivo models such as the forced swimming test, the open field test, the tail suspension test, or a model of stress-impaired memory. The overall effect cannot be attributed to a single constituent or fraction. SJW is therefore an outstanding example of the total extract being defined as the active constituent of herbal medicines. 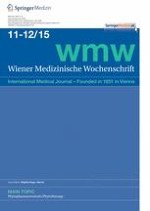 High acceptance of herbal medicinal products: What does the future hold?

Phytopharmaceutical treatment of anxiety, depression, and dementia in the elderly: evidence from randomized, controlled clinical trials

Molecular mechanisms of pharmacological doses of ascorbate on cancer cells