The impact of rest breaks on subjective fatigue in physicians of the General Hospital of Vienna | springermedizin.at Skip to main content
SUCHE MENÜ 1 2 3 4

Medical doctors are affected by high levels of occupational burnout. Work organization such as sufficient rest breaks can decrease stress and fatigue; however, rest breaks are often skipped under high workload and time pressure. The present study sought to investigate the effect of self-determined rest breaks on acute and daily levels of fatigue in physicians of the General Hospital of Vienna.

Rest breaks and fatigue were recorded throughout day shifts over a time span of 4 weeks with a mobile assessment device. A total of 12 physicians of a university clinic participated in the study. Data were analyzed using generalized estimating equations.

Analyses were based on a total of 115 workdays including 93 rest breaks and 800 fatigue assessments. Physicians took an average of 0.81 rest breaks per day. Fatigue was lower in the 30 min after the break than in the hour before the break; however, the number of rest breaks did not affect the increase of fatigue during shifts.

Physicians are faced with high levels of burnout, a syndrome primarily based on emotional exhaustion (i.e. mental and motivational fatigue) and depersonalization (i.e. a negative attitude towards patients and work) [1]. Studies have found that the prevalence of burnout in physicians significantly exceeds that of the general public [2] and has increased in the last decade in various countries [3, 4]. High levels of burnout also have been found in Austrian physicians [5], levels being comparable, albeit slightly lower, to those found in an international meta-analysis [6]. Consequences of physician burnout are severe, including an increased risk of patient safety, poorer quality of care, reduced patient satisfaction, lower productivity and lower levels of physician health [1, 7‐9]. Several factors have been identified to contribute to burnout in physicians, including inefficient work processes, excessive workload, bad organizational climate and family responsibilities [1, 10].
Based on this situation recently described as “global crisis of physician burnout” by the Lancet [11], efforts to reduce burnout in physicians have been undertaken. Interventions aimed at the physician (e.g. stress management) and interventions aimed at the organization (e.g. focusing workload, work schedule or communication) are effective in reducing burnout, although those addressing the organization alleviate burnout to a greater degree [12, 13]. One measure potentially reducing burnout are rest breaks. Rest breaks can be seen as determined both by organizational as well as by individual factors [14, 15]. It can be assumed that rest breaks prevent the build-up of acute fatigue and thus reduce the risk of exhaustion on the long run, despite the fact that fatigue and burnout are overlapping, but not identical conditions [16, 17]. Rest breaks have been shown to reduce subjective fatigue [18, 19], improve performance and work engagement [20, 21] and reduce occupational injuries and physical complaints [22, 23]. For nurses, rest breaks are acknowledged to be important to sustain health and well-being [14]; however, despite some studies on the positive effect of rest breaks on surgeons during surgery [23, 24], rest breaks have not been studied in medical doctors to the best of our knowledge, which is surprising considering the elevated levels of burnout in this group of health professionals.
Anzeige
In the present study, the effect of rest breaks on fatigue was investigated in physicians of a University Clinic of the General Hospital of Vienna during day shifts. The present study utilized a design with high ecological validity, assessing self-determined rest breaks and fatigue throughout the workday over a time span of 4 weeks. For this purpose, a mobile device with minimal impact on working routine was used. We assumed that (hypothesis 1) subjective fatigue would be lower after a rest break than prior to a rest break, (hypothesis 2) subjective fatigue would increase over the workday, and (hypothesis 3) that the increase of fatigue over a working day would be negatively related with the number of rest breaks taken during that day.

Study participants received a mobile device (XIMES corp. Vienna, Austria) [25] for recording rest breaks as well as fatigue during workdays for a time span of 4 weeks. Individuals recorded the start and end of individually paced rest breaks defined as temporary interruptions of work for the means of recovery with a duration of at least 3 min. No restrictions were placed on the number, time and duration of rest breaks, which were fully at the individual’s discretion. In addition, individuals were prompted roughly every 90 min by a vibration of the device to record their present level of fatigue with a single item measure. Fatigue was also assessed at the beginning and end of each workday. Every fatigue assessment was recorded with a time stamp. The beginning and end of workdays were determined by activating and deactivating the device by the study participant. The assessment took place from 5 to 27 November 2019. The study was approved by the ethics board of the Medical University of Vienna (EK Nr. 2020/2018).

The dependent variable was acute fatigue assessed with the single item measure “How much in need of recovery do you feel at the present moment?”. This item was chosen from the items of the fatigue sub-scale from a standardized German well-being questionnaire [26] on the basis of previous diary research [27, 28] as it showed the highest levels of change sensitivity. Answers were coded on a worded numeric rating scale with the descriptors 1 = “not at all” (“gar nicht”), 2 = “hardly” (“kaum”), 3 = “slightly” (“leicht”), 4 = “averagely” (“mittel”), 5 = “fairly” (“ziemlich”), 6 = “very” (“sehr”) and 7 = “extraordinarily” (“außerordentlich”). The fatigue measure showed an acceptable distribution (m = 3.9, SD = 1.8, skewness = 0.08, kurtosis = −0.79, range = 1–7). The independent variables were the number of rest breaks per day (rest break frequency), the time of day as well as the relative time between rest breaks and fatigue assessments. Additional variables were the number of assessment days and workdays per individual, the beginning and end of workday and the duration of workdays.
Anzeige

We would like to thank Ingwald Strasser for his efforts in supporting the present study as employee representative within the Medical University of Vienna and its various review boards.

G. Blasche, A. Arlinghaus and R. Crevenna declare that they have no competing interests.
Anzeige

The study was approved by the ethics board of the Medical University of Vienna (EK Nr. 2020/2018). Informed consent was obtained from all individual participants included in the study.
Open Access This article is licensed under a Creative Commons Attribution 4.0 International License, which permits use, sharing, adaptation, distribution and reproduction in any medium or format, as long as you give appropriate credit to the original author(s) and the source, provide a link to the Creative Commons licence, and indicate if changes were made. The images or other third party material in this article are included in the article’s Creative Commons licence, unless indicated otherwise in a credit line to the material. If material is not included in the article’s Creative Commons licence and your intended use is not permitted by statutory regulation or exceeds the permitted use, you will need to obtain permission directly from the copyright holder. To view a copy of this licence, visit http://​creativecommons.​org/​licenses/​by/​4.​0/​. 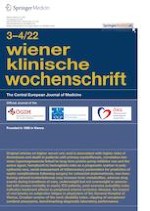 Hematocrit to hemoglobin ratio as a prognostic marker in polycythemia vera

Croatian version of the neck disability index can distinguish between acute, chronic and no neck pain

Is there a correlation between hypomagnesemia linked to long-term proton pump inhibitor use and the active agent?