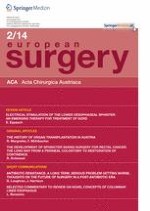 The development of sphincter saving surgery for rectal cancer: the long way from a perineal colostomy to restoration of continence

Electrical stimulation of the lower oesophageal sphincter: an emerging therapy for treatment of GORD

Esophageal schwannoma: report of a case and review of the literature