Squamous cell carcinoma is the most common type of neoplasm of the esophagus with global incidence. Its early symptoms are often nonspecific as the disease could be detected only when metastases in various organs are already presented. Esophageal metastases present an extremely small part from all cutaneous metastases as the real incidence of cutaneous metastases due to cancer of the esophagus account for 0.5–9 % and only a small part of them are reported and rarely involve the facial region. Despite this, cutaneous metastases may be the first sign of malignancy of the esophagus, which immediately determined the worst prognosis and fatal outcome in these patients. Average survival prognosis at the time of diagnosis of esophageal carcinoma in stage IV is 4–6 months, while the survival-associated expectations in cases of associated skin lesions manifestation is 4 months. We present a rare case of esophagus carcinoma in advanced stage, presented with severe cutaneous metastasis in the face region, accompanied by heavy blood coughing and hematemesis, which led to fatal outcome in the reported patient. The incidence of cutaneous metastases due to this visceral malignancy is discussed, as we highlight the frequency of metastases as a first clinical sign in esophageal cancer. The mortality rate is high due to the advanced stage of progression of the disease or presented metastases spread at the time of diagnosis, while treatment-related mortality accounts 10.3 %.
Anzeige
Vorheriger Artikel Erratum to: Giant extragenital Bowen’s disease 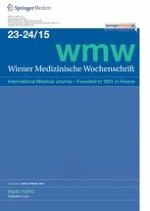 When is an invasive palliative intervention in an acute internal medical patient worth it? A structured palliative approach