The fight against cancer is the focus of many research groups, as it is classified as one of the leading causes of death. The treatment of cancer is mainly composed of surgery, chemotherapy, radiation therapy, immunotherapy, and nowadays through targeted therapy as well. Targeted therapy targets the molecules whose expression correlates to carcinogenesis. It can be performed either with small molecule drugs or with monoclonal antibodies. Based on the capacity of the monoclonal antibodies to recognize a certain epitope of an antigen, and the fact that cancer cells express many antigens compared with normal (noncancer) cells abnormally in their surface, cytotoxicity may be induced directly in these cells. The cytotoxicity can be caused either via antibody-dependent cellular interaction or via the complement system. The possibility to create monoclonal antibodies against any antigen led to production of new medicines, many of which are already in clinical use. The ability to conjugate several molecules to antibodies also made the delivery of drugs/substances directly to cancer cells possible, thereby reducing the side effects of cancer treatment. This review presents the implementation of antibodies to targeted therapy, emphasizing the antibody-dependent cytotoxicity, as well as the monoclonal antibodies that are used in cancer treatment. 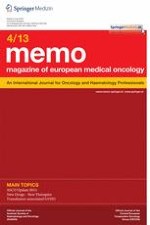 ASCO 2013—new concepts and the path to individualized therapy

Recent developments in the palliative treatment of breast cancer: ASCO 2013

Neurooncology: current findings and challenges for the future