Symptoms of a post-traumatic stress disorder can follow Tako-tsubo cardiomyopathy. This vignette describes such a linkage and exemplifies the risk that these symptoms may remain undetected.

After a skiing accident that had evoked existential fear of suffocation, a post-menopausal woman was diagnosed with Tako-tsubo syndrome and myocardial contusion. Symptoms of post-traumatic stress disorder appeared 2 weeks after remission of the cardiomyopathy. Two months later, a psychological assessment was conducted during cardiac rehabilitation. A post-traumatic stress disorder was diagnosed and successfully treated by narrative exposure. 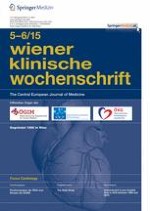 Quality of life after peripheral bypass surgery: a 1 year follow-up