To analyze data obtained in a representative number of patients with primary rectal cancer with respect to lymph node diagnostics and related tumor stages.

In pT2-, pT3-, and pT4 rectal cancer lesions, the impact of investigated lymph nodes on the frequency of pN+ status, the cumulative risk of metachronous distant metastases, and overall survival was studied by means of a prospective multicenter observational study over a defined period of time.

For years, retrieval staging has been a paradigm in colorectal cancer surgery. However, recently published analyses have demonstrated that a maximum number of regional lymph nodes is required for accurate tumor but the proportion of node-positive colorectal cancers has not increased over the years, despite steadily increasing numbers of lymph nodes examined in colorectal cancer specimens [1‐4]. These analyses generated some doubt regarding the hypothesis that “upstaging” of colorectal cancers occurs as the number of examined lymph nodes increases, and suggest that examination of more than 12 lymph nodes (or as many lymph nodes as possible) might not be beneficial with respect to staging accuracy.
Interestingly, Parsons et al. and Erning et al. found that a higher number of removed lymph nodes is indeed associated with improved long-term survival, even though the proportion of lymph node-positive cancers identified is not increased. This seems to be true for both node-negative and node-positive disease. Other authors have reported similar observations [5, 6].
Anzeige
Based on a multicenter database of surgically treated rectal cancer patients, the analysis presented here aimed at examining the role of lymph node harvest as a component of adequate histopathological tumor staging as well as the association between the total number of lymph nodes examined and the number of tumor-positive lymph nodes. Moreover, longitudinal changes in lymph node diagnostics during the study period were evaluated.

The analysis is based on data collected within the prospective multicenter observational study on rectal cancer surgery conducted by the Institute for Quality Assurance in Operative Medicine at Otto-von-Guericke University, Magdeburg, Germany (as previously reported [7‐16]). Within this database, patient-, tumor-, and treatment-related parameters obtained in patients with newly diagnosed rectal cancer (defined as cancer located within 16 cm of the anal verge) were recorded. Tumor staging was achieved using CT scan (98%), EUS (80%), and MRI (36%) according to the regional clinical care as established at the time of analysis. In all cases with tumor lesion at the middle and lower third of the rectum, TME was performed (patients with rectal cancer at the upper third underwent PME or TME).
Paraaortic lymphadenectomy (and D3 lymphadenectomy) was not defined as a standard part of oncological resection. However, if this extensive lymphadenectomy was performed, it is was not precisely documented.
According to the guideline-based recommendations, as standard, D2 lymphadenectomy was performed.
Anzeige
Informed consent from all patients is required prior to data entry into the database. Surgical departments of all levels of care throughout Germany are encouraged to enter their data; however, participation in the study is voluntary (the precise number of actively practicing surgeons at the time of data documentation was not registered).

For the present analysis, all patients entered into the database from January 1, 2000, to December 31, 2011, were investigated if they fulfilled the following criteria:
i
Primary radical surgery for rectal cancer without neoadjuvant treatment;
ii
Availability of complete histopathological tumor classification.
Patients who had undergone chemoradiation as indicated were not included in the study. In addition, patients who had undergone non-radical rectal cancer surgery (e.g., local tumor excision) were also not registered.

Changes in the following parameters over the study period were determined:
Moreover, the impact of tumor growth through the rectal wall (“pT stage”) on lymph node metastases was described. The association between the number of lymph nodes examined per specimen and the rate of detected lymph node-positive cancers was also examined separately for each of the pT stages 2, 3, and 4.
To account for possible bias inflicted by improvements in lymph node diagnostics implemented during the study period, additional analysis was undertaken using exclusively data from institutions having contributed to the registry throughout the entire period studied (2000–2011). For each institution, the average number of lymph nodes examined per specimen in the years 2000 and 2001 were compared to the corresponding numbers from years 2010 and 2011. Based on these comparisons, the institutions were subdivided into those in which the number of lymph nodes examined had
i
increased significantly from 2000/2001 to 2010/2011, and
ii
remained unchanged.
Within both groups, the rate of node-positive cancers was compared between the years 2000/2001 and 2010/2011.
Additionally, the association between lymph node metastasis and synchronous distant metastasis as well as metachronous distant metastasis diagnosed after potentially curative rectal resection was studied. For the latter, oncological long-term outcome data for patients recorded between 2005 and 2007 were collected and used to analyze the influence of UICC tumor stage, pN stage, and number of lymph nodes examined (in categories of less than 12 lymph nodes: LN class 1; 12 through 17 lymph nodes: LN class 2; 18–23 lymph nodes: LN class 3; or more than 23 lymph nodes: LN class 4) on the emergence of metachronous distant metastases.
Anzeige

Within the 12-year study period (01/01/2000 through 12/31/2011), data from n = 23,773 patients undergoing primary radical resection for rectal cancer without neoadjuvant treatment for whom complete histopathological tumor classification was available were entered into the observational study database. As the proportion of patients who received neoadjuvant treatment and had to be excluded from the analysis increased, a steady decline of patients available for study entry over the 12-year period was observed. Moreover, a significant increase in mean age, proportion of patients in UICC tumor stage IV, and proportion of patients whose tumors were located > 12 cm from the anal verge was recorded.
In Table 1, patient characteristics over the study period from 2000–2011 are shown.
Table 1
Changes in patients characteristics over time
m male, f female
*statistically significant p-value
The rate of rectal cancer specimens from which at least 12 lymph nodes were retrieved and examined increased from 73.6% to 93.2% (p < 0.001) during the study period. Correspondingly, the mean number of lymph nodes harvested from each specimen increased from 16.2 to 20.8 (p < 0.001; Table 2). In spite of these numerical improvements in lymph node diagnostics, only a minor non-significant variation in the rate of patients diagnosed with lymph node-positive cancer was observed (p = 0.130). The mean number of tumor-bearing lymph nodes per specimen did not change significantly during the study period regardless of whether all patients or only pN+ patients were analyzed (lymph nodes per specimen 2.2–2.6, p = 0.331, and 5.2–5.8, p = 0.479, respectively; Table 2).
Table 2
Changes in specimen characteristics over the years
LN lymph node(s)
*statistically significant p-value
Considering the tumor infiltration depth, pT1 and pT4 cancers showed a slight increase (from 8.2% to 12.5% and from 7.1% to 11.8%, respectively) over the study period. Conversely, the rate of pT2 and pT3 cancers decreased (Table 2).
Fig. 1 shows the probability of lymph node metastasis (pN+) as well as distant metastasis diagnosed on preoperative imaging or intraoperatively as a function of tumor infiltration depth (pT category). Both lymph node metastasis and distant metastasis were significantly more likely to be diagnosed in patients with a more advanced pT stage (p < 0.001). The likelihood graphs for lymph node and distant metastases are parallel.
×
The probability of synchronous distant metastasis as a function of lymph node involvement (pN0 vs. pN1 vs. pN2) can be seen in Fig. 2a for pT categories 1 through 4. In each of these pT categories, more extensive lymph node involvement was significantly associated with an increase in the probability of distant metastasis diagnosed synchronously with the primary tumor. Moreover, the number of tumor-positive lymph nodes had a significant impact on the probability of distant metastases (p < 0.001, Fig. 2b), whereas in node-negative patients, no association between the number of lymph nodes examined and the probability of synchronous distant metastasis was found. The average risk for pN0 patients to be diagnosed with synchronous distant metastases was 4.5% (Fig. 2c).
×
Anzeige

Follow-up data of 70% of the patients entered into the database between 2005 and 2007 (n = 2733 of 3930; best follow-up data quality during this time period) were available to analyze the association between initial lymph node involvement and the development of metachronous metastatic disease. Median follow-up was 55.0 (95% CI: 53.9–56.1) months. Fig. 3a shows the cumulative risk for metachronous metastasis after potentially curative rectal resection as a function of UICC tumor stage, whereas Fig. 3b shows its association with the initially diagnosed pN category. While patients with lymph node-negative cancer had a 6.7% cumulative risk of developing distant metastases at 4 years, this was 19.4% for patients with node-positive cancers (p < 0.001). The cumulative risk for patients with pN1 vs. pN2 nodal status was only marginally different (18.0% vs. 21.8%, respectively; p = 0.017).
×

The number of lymph nodes examined in patients with node-negative cancers (pN0) was not significantly associated with the probability of developing metachronous distant metastasis in any of the pT categories pT2, pT3, and pT4. Fig. 5 shows the cumulative risk for distant metastasis in lymph node (LN) classes 1 through 4 (see Patients and methods) for patients initially diagnosed with pT3 pN0 cM0 cancers. The cumulative risk for the development of distant metastasis was 6.2%, 8.6%, 9.0%, and 15.2% in LN classes 1 through 4, respectively (log-rank test).
×
×

H. Ptok, F. Meyer, R.S. Croner, I. Gastinger, and B. Garlipp declare that they have no competing interests.

Research involving human participants and/or animals. The study was performed according to the guidelines and ethical standards of the Declaration of Helsinki for Biomedical Research from 1964 by the World Medical Association and its further amendments, the policy of the local institutional ethics committees, as well as according to the requirements of Good Clinical Research and Good Clinical Practice. Data generation, documentation, and evaluation was performed according to prerequisites of data protection law of the German district Saxony-Anhalt and according to federal law. With regard to the study concept, it can be stated that a (potential) danger for study participants can be definitely excluded. There is no imponderable risk or side effect for the patient. Informed consent. Each patient signed an informed consent form prior to i) surgery, including appropriate explanation of the surgical intervention and potential complications, and ii) generation and documentation of data in the patient data registry.
Open Access This article is licensed under a Creative Commons Attribution 4.0 International License, which permits use, sharing, adaptation, distribution and reproduction in any medium or format, as long as you give appropriate credit to the original author(s) and the source, provide a link to the Creative Commons licence, and indicate if changes were made. The images or other third party material in this article are included in the article’s Creative Commons licence, unless indicated otherwise in a credit line to the material. If material is not included in the article’s Creative Commons licence and your intended use is not permitted by statutory regulation or exceeds the permitted use, you will need to obtain permission directly from the copyright holder. To view a copy of this licence, visit http://​creativecommons.​org/​licenses/​by/​4.​0/​. 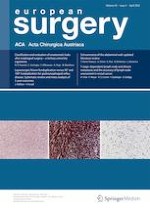 Minimally invasive esophagectomy for cancer in COVID hospitals and oncological hubs: are the outcomes different?

The impact of “COVID-mania” on medical scientific literature. Are we facing a publication pandemic?