TachoSil and its predecessor products, TachoComb and TachoComb H, have been extensively used in a variety of multidisciplinary surgical settings since being introduced in the early 1990s. However, to date, TachoSil remains the first and only dual action patch for general tissue sealing and is frequently used in variety of surgical indications other than haemostasis. Classically, TachoSil is indicated for improvement of haemostasis. However, there is recently some evidence suggesting that it can be successfully used in promoting tissue healing, which could be useful in various non-hemostatic indications. TachoSil is safe and well tolerated, with occurrence of adverse events similar in TachoSil and non-TachoSil treated patients in controlled trials. The clinical implications of such an approach are obvious. Despite its cost, potential benefits could easily translate into cost savings due to avoidance of complications and to reduction of duration of hospital stay. Existing data are limited and further randomized controlled studies are needed to accurately establish the role of TachoSil for non-hemostatic indications in a variety of surgical indications, such as in abdominal and gastrointestinal surgery, pulmonary surgery, cardiothoracic surgery, renal surgery, gynecology, neurosurgery and more.
Anzeige
Vorheriger Artikel Modern surgery and ancestor reflux
Nächster Artikel Cleft lift versus standard excision with primary midline closure for the treatment of pilonidal disease. A snapshot of worldwide current practice 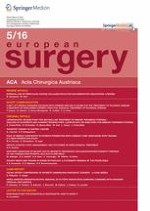