Although age is no contraindication for pancreatic cancer resections, there are conflicting reports of morbidity and mortality rates and only few data showing direct comparisons of survival for octogenarians and patients younger than 80 years.

Comparison of complication, reintervention, reoperation, and 30-day in-hospital mortality rates, length of stay, and survival of all octogenarians and patients younger than 80 years undergoing pancreatectomy for ductal adenocarcinoma during the study period from 2001 to 2010 was done. All resectable patients with suspected ductal adenocarcinoma who deemed to be fit for surgery in an interdisciplinary assessment (anesthesiology, gastroenterology, oncology, surgery) were offered pancreatectomy. The only exceptions were Eastern Cooperative Oncology Group (ECOG) performance score 3 and 4 or advanced dementia patients. Resectability was determined according to contrast-enhanced computed tomography scans (pancreas protocol). The database was prospectively maintained. For survival analysis, a first follow-up was made on December 31, 2010, by a query of the national register of residents with retrieval of corresponding International Classification of Diseases (ICD) death diagnoses by the Austrian Institute of Statistics. For surviving octogenarians, a second follow-up was made by telephone interview on August 21, 2013.

We identified 9 octogenarians and 99 patients younger than 80 years. Median age in the two groups was 83 and 67 years, respectively. The predominant procedure in both groups was pylorus-preserving pancreaticoduodenectomy (55.6 and 68.7 %, respectively). Complications occurred in 33.3 and 28.3 % of patients, respectively. Reintervention, reoperation, and 30-day in-hospital mortality rates of patients younger than 80 years were 9.1, 6.1, and 5.1 %, respectively. In the octogenarian group, there were no pancreatic fistulas, one transient ischemic attack after stenting of an intraoperatively detected stenosis of the celiac trunk, one infected hematoma that was managed with intravenous antibiotics, and one wound infection. There were no reoperations or postoperative reinterventions. Median length of stay was 18 days, and postoperative 30-day mortality was nil. Median survival was comparable for both age-groups (10.5 vs. 12.1 months, respectively).

In an interdisciplinary setting, surgical quality data and survival after pancreatic cancer resections are comparable in octogenarians and patients younger than 80 years. 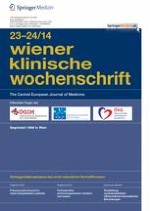 Can mean platelet volume be a novel predictive marker in patients with pelvic inflammatory disease?