Using data from the Austrian Central Cancer Registry, we calculated age-standardized incidence, histopathology-specific incidence, and age-standardized and birth cohort-specific mortality rates for all lung cancer cases in Austria. Using national survey data, we estimated prevalence of smoking in the Austrian population. Our analysis covers the time period from 1970 to 2009.

In 2009, lung cancer incidence rates were 41.3/100,000 and 18.5/100,000 and mortality rates were 36.3/100,000 and14.5/100,000, for males and females, respectively. Male lung cancer rates declined but increased steadily in females over the past three decades. In 2009, the most common histological type is adenocarcinoma, which reflects a shift from predominantly squamous cell carcinoma and large cell carcinoma in the mid 1980s. In 2009, 27 % of men and 19 % of women were smokers, which represent a rise of smoking rates in women, especially in younger women, and a decline in the men.

While in Austrian men the lung cancer rates, in accordance with their decreasing prevalence of smoking, declined over the past 30 years, the increasing smoking prevalence and lung cancer rates in women remain a public health concern. Antismoking laws and public health initiatives to curtail smoking habits are needed in Austria, especially targeting younger women.
Anzeige
Nächster Artikel Central venous to arterial pCO2 difference in cardiogenic shock 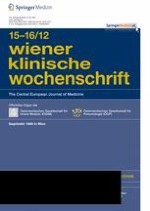