Elderly people are especially prone to suffer adverse drug reactions (ADR). Main reasons for the higher vulnerability of the elderly to ADR are changes in metabolism as i.e. slower renal clearance and polypharmacie which often results from multimorbidity. To prevent ADR careful prescription with special consideration of these aspects is warranted. To help physicians avoid drugs which are especially likely to cause ADR lists have been developed following the consensus method process. For Germany this list is called the PRISCUS list. It was developed based on a literature review, review of international lists such as the American Beers list, and a consensus process based on a Delphi survey. It contains 83 drugs from 18 classes which are classified as potentially inapropriate medication (PIM). It also lists alternatives for each PIM. If a drug is registered with the PRISCUS list this does not mean automatically that it is contraindicated in the elderly but that special caution should be excercised in prescribing the drug, alternatives should be considered and the patient carefully monitored.
Prescription rates for PIMs in Germany in the elderly is pretty much stable at around 23% with only a small decline in the past years. Also, more than 5% of all prescriptions in the elderly are PIM prescriptions. Physicians specially trained in geriatrics tend to prescribe less PIMs compared to other physicians. 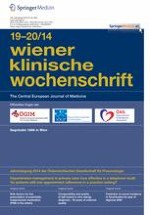 Biological pathways involved in the development of inflammatory bowel disease

Hypertension management in primary care: how effective is a telephone recall for patients with low appointment adherence in a practice setting?