Sporadic duodenal cancer is a rare cancer entity. Therefore, the prognostic significance of clinicopathologic features is unknown. This study aimed to identify prognostic factors and compare survival with other tumour entities of the same anatomical region.

Whipple surgery was performed in seven cases (31.8 %), pylorus preserving pancreaticoduodenectomy in 14 cases (63.6 %) and partial duodenectomy in one case (4.5 %). R0-resection was achieved in 86.4 %. In all, 50% of our patients had nodal positive disease. Overall morbidity was 59.1 % and perioperative mortality was 9.1 %. Survival after resection was 63.6 % and 59.0 % (3- and 5-years). There was no significant survival difference between patients with DAC and ampullary cancer, but survival was longer compared with patients with pancreatic cancer.

Mortality seems to be high after resection of DAC. However, radical surgery should be performed due to the high number of patients with nodal positive disease. No definite prognostic factors were identified. The prognosis after resection of duodenal cancer can be compared with patients with ampullary cancer.
Anzeige
Vorheriger Artikel Simultaneous resection of primary colorectal cancer and synchronous liver metastases is associated with a high cardiovascular complication rate
Nächster Artikel Treatment of Boerhaave’s Syndrome: Specialized Esophago-Gastric Unit Experience on Twelve Patients 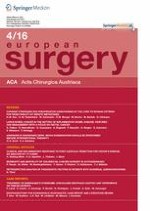 Morbidity and mortality of colorectal cancer surgery in octogenarians