Parastomal hernia is observed in every third patient having a stoma. The different methods of repair still have a recurrence rate of 12–35 %. According to increasing literature data, placing a mesh with a preventive intention seems to decrease dramatically the possibility of parastomal hernia formation.

Between 2003 and 2009 we have placed a 3-dimensional mesh extraperitoneally, at the time of Miles operations (14 open and 3 laparoscopic cases, total 17). This group of patients was compared in a non-randomized, prospective, observational study to a control group consisting of the same number of patients in which open Miles operations were performed in the same observational period. From 2012, based on this experience, a new settled device was introduced to the market and applied for prevention and for repair of parastomal hernia at our institute.

In the first trial, in the mesh group, after a 4.7-year mean follow-up period there were no parastomal hernia formations at all. In the non-mesh group, after 4.6-year mean follow-up period parastomal herniation was found in 55 % of the cases. In the mesh group, two strictures were observed as complications, both of which could be managed conservatively. Second trial’s interim results are also very promising.

Our experiences confirm the literature data that placing a mesh at the time of definitive stoma formation is preferable. The devices used by us unite the advantages of strengthening both sheets of the rectus abdominis muscle. In addition, changing the operative strategy to a laparoscopic approach gives an extra advantage to this procedure. 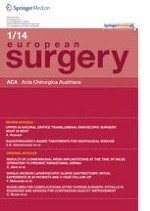 Guidelines for complications after thyroid surgery: pitfalls in diagnosis and advices for continuous quality improvement

Future of science to foster being