Gastrointestinal tuberculosis (TB) is a rare manifestation in low TB-incidence countries such as Austria. It is usually seen in immunocompromised patients or in migrants being more susceptible for extrapulmonary disease manifestations.

We report a very rare manifestation of severe gastrointestinal TB in a 49-year-old previously healthy man from Upper Austria. Endoscopy showed a large tumor mass obstructing about 2/3 of the lumen of the cecum. Positron emission tomography/computed tomography scan revealed not only a high metabolic activity in the tumor mass, but also active pulmonary lesions in both upper lung lobes. Bronchial secretion showed acid-fast bacilli in the microscopy and polymerase chain reaction was positive for M. tuberculosis complex. Phenotypic resistance testing showed no resistance for first-line anti-TB drugs. Treatment with isoniazid, rifampicin, pyrazinamide and ethambutol was initiated. Based on therapeutic drug monitoring, the standard treatment regime was adapted to rifampicin high dose. TB treatment was well tolerated and the patient achieved relapse-free cure one year after the end of treatment.

Gastrointestinal involvement mimicking an intestinal tumor is a very rare TB manifestation in previously healthy Austrians. However, it should be kept in mind due to increasing migration from countries with higher rates of extrapulmonary TB and due to an increasing number of immunocompromised patients. TB telephone consultations can support medical professionals in the diagnosis and the management of complex TB patients. TB management is currently at a transitional stage from a programmatic to personalized management concept including therapeutic drug monitoring or biomarker-guided treatment duration to achieve relapse-free cure.
Hinweise

Tuberculosis (TB) accounts for one of the major global health problems accounting for around 10 million newly infected individuals with about 1.4 million deaths in 2019 [1]. Mycobacterium tuberculosis can cause pulmonary as well as extrapulmonary disease. The latter may affect any organ accounting for around 16% of all TB cases worldwide [1].
The prevalence of extrapulmonary TB varies significantly by geographic region and ethnicity [2]. In countries with a low TB-incidence such as Austria extrapulmonary TB is usually seen in immunosuppressed patients or in foreign-born individuals from Middle Eastern, Asian or African countries [2‐5]. Other risk factors for abdominal TB are human immunodeficiency virus (HIV) infection, malnutrition, diabetes mellitus, malignancy, liver cirrhosis, peritoneal dialysis, and certain biologics including tumor necrosis factor-alpha (TNF-α) inhibitors [6, 7]. Abdominal TB can involve the gastrointestinal tract, peritoneum, lymph nodes, or any solid organ accounting for approximately 12% of extrapulmonary TB [5]. It may present as ulceration, peritoneal seeding, tumor mass, or abscess formation mimicking other abdominal diseases [8‐10]. Establishing the diagnosis is often challenging, as clinical, radiological and laboratory findings are nonspecific and the performance of diagnostic tests is limited [10, 11].
Anzeige
According to the most recent TB report of the Austrian Agency for Health and Food Safety (AGES), nearly 25% of TB cases in 2018 were extrapulmonary manifestations. However, information about ethnicity and site of disease was not specified [12]. However, in low TB-incidence countries abdominal TB of the gastrointestinal tract appears to be extremely uncommon in previously healthy Caucasian individuals [5, 10].
We report a very rare manifestation of severe abdominal TB mimicking a large intestinal tumor in a previously healthy Caucasian man born in Upper Austria.

A 49-year-old previously healthy man from Upper Austria presented to the general practitioner with occasional epigastric pain aggravating after eating a meal. In physical examination a painless and soft abdominal mass was palpable in the right lower abdomen. Routine laboratory findings were unremarkable. An abdominal ultrasound showed a stenosis of the ascending colon.
Computed tomography (CT) scan of the abdomen revealed marked thickening of the ascending colon wall with stenosis of the lumen and a retroperitoneal lymphadenopathy (Fig. 1a). For further investigation a colonoscopy was performed showing a tumor mass obstructing about 2/3 of the lumen of the cecum (Fig. 2). A biopsy was taken for histopathological evaluation. Gastrointestinal malignancy was suspected and the patient was subsequently registered for discussion in the interdisciplinary tumor board. Meanwhile, results of the histopathological evaluation revealed epithelioid granuloma with giant cells and surrounding inflammatory cells without any evidence of malignancy (Fig. 3). This finding was highly suspicious for M. tuberculosis infection.
×
×
×
Anzeige
The patient was transferred to the infectious disease ward of the Kepler University Hospital in Linz, Austria. He was isolated in a single-occupancy patient-care room and sputum samples were collected. CT scan of the chest showed a nodule with a small cavity in the upper lobe of the right lung and infiltrates on the left side (Fig. 1c). Repeated smears for acid-fast bacilli were negative, but polymerase chain reaction (PCR) assay testing for M. tuberculosis complex (GeneXpert MTB/RIF assay, Cepheid, Sunnyvale, CA, USA) from two different sputum samples were positive. TB diagnosis was reported to the TB control office of the Magistrat Linz were we received the information that his father had died 6 years before due to miliary TB. Further TB contact tracing identified another TB infected person from his close contacts.
Molecular susceptibility testing for rifampicin and isoniazid resistance was not possible due to the low mycobacterial load in the sputum. Consequently, a bronchoscopy was performed. Analyses of bronchial secretion showed acid-fast bacilli in the microscopy and PCR was again positive for M. tuberculosis complex. Time to culture positivity was 9 days showing no phenotypic resistance against rifampicin, isoniazid, ethambutol, pyrazinamide, and streptomycin. Viral serologic testing was negative for HIV-1/2.
Antimycobacterial therapy was initiated including isoniazid (H) 300 mg once daily (od), rifampicin (R) 600 mg od, pyrazinamide (Z) 1500 mg od (25 mg/kg body weight) and ethambutol (E) 1000 mg od (15 mg/kg body weight). To rule out involvement of other organs a whole body positron emission tomography/computed tomography (PET-CT) scan with F‑18 fluorodeoxyglucose ([18F]FDG; Siemens Biograph 40, Siemens Healthcare AG, Lausanne, Switzerland) was performed showing increased metabolic activity in the apical regions of both upper lung lobes as well as in the cecum compatible with the tumor mass (Fig. 4 and 5). Other organs did not show any pathological tracer uptake. Contrast magnetic resonance imaging scan (Magnetom Skyra, Siemens Healthcare AG, Lausanne, Switzerland) of the brain showed no evidence of cerebral involvement.
×
×
Treatment was well tolerated without any adverse events. Therapeutic drug monitoring revealed a suboptimal maximal concentration (Cmax) of rifampicin with 4.4 mg/l two hours post-dose. Consequently rifampicin dose was increased to 1200 mg od resulting in a sufficient Cmax of 16.0 mg/l [13, 14]. On the first follow-up CT scan of the abdomen and chest 3 months after the start of antimycobacterial therapy, improvement was documented showing a significantly shrinking intestinal tumor mass compared to initial findings (Fig. 1). Treatment with isoniazid and high-dose rifampicin was continued for another 7 months before TB treatment was stopped after a total of 12 months. At the end of treatment, the colonoscopy showed no pathological findings.

We thank the patient for giving permission to publish the images. Additionally we thank Bettina Almesberger and her team for their excellent and often challenging nursing care of TB patients at the infectious disease ward D3.2 at the KUK.

G. Shao, B. Chitechi, G. Demireli, K. Ornig, M.J. Neuböck, S. Heldt, M. Mandl, C. Paar, M. Winkler, B. Lamprecht and H.J.F. Salzer declare that they have no competing interests.
Open Access This article is licensed under a Creative Commons Attribution 4.0 International License, which permits use, sharing, adaptation, distribution and reproduction in any medium or format, as long as you give appropriate credit to the original author(s) and the source, provide a link to the Creative Commons licence, and indicate if changes were made. The images or other third party material in this article are included in the article’s Creative Commons licence, unless indicated otherwise in a credit line to the material. If material is not included in the article’s Creative Commons licence and your intended use is not permitted by statutory regulation or exceeds the permitted use, you will need to obtain permission directly from the copyright holder. To view a copy of this licence, visit http://​creativecommons.​org/​licenses/​by/​4.​0/​. 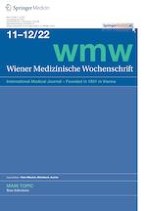 Confluent abscesses in autochthonous back muscles after spinal injections

Soft tissue infection as a rare cause of neonatal sepsis