Image-guided percutaneous radiofrequency ablation (RFA) is a viable treatment option for unresectable liver metastasis from gastrointestinal cancer. With optimized technology and sufficient safety margins, RFA reaches oncologic results comparable to surgery. However, use of RFA for resectable liver metastases is controversially discussed. The feasibility and success of RFA depend on the size and location of the liver lesion. Single-needle in-plane techniques have important limitations and may be largely overcome by multineedle approaches using 3D treatment planning and stereotactic needle guidance. The major obstacle for the acceptance of RFA is the current lack of an international standardized definition and documentation of treatment success. In analogy to surgical R0 resection, A0 ablation including a 3D safety margin of at least 5 mm, objectively verified and documented by true fusion of post- with preablation images has to be demanded. Considering the patient’s huge advantage of a minimal invasive local therapy, options for RFA should be discussed in interdisciplinary oncologic boards and communicated to the patient. Randomized controlled studies for getting answers to whether A0 ablation may prove as a true alternative to surgical resection in liver metastasis from gastrointestinal cancer are heavily awaited. 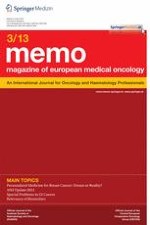 Molecular therapies of colorectal cancer: where will we go from here?

Georgia on my mind: multiple myeloma highlights at ASH 2012

Philadelphia-negative myeloproliferative neoplasms at the 2012 ASH meeting: a personal summary