Esophageal cancer is one of the ten most frequent tumors worldwide. There are two major histologies: squamous cell carcinomas, which appear more frequently in the upper part of the esophagus, and adenocarcinomas, which are predominantly found in the distal part and at the gastroesophageal junction. Most patients suffer from locally advanced tumors, for which the prognosis is still poor with a 5-year survival rate of 15–25%. Treatment is based on histology, tumor stage, location of the tumor, performance status, age, and comorbidities and it consists of surgery, chemotherapy, or radiotherapy or a combination of these. Over the past decades, neoadjuvant radiochemotherapy followed by surgery became standard of care in patients with locally advanced squamous cell carcinomas suitable for surgery. The treatment of locally advanced adenocarcinomas and junctional tumors is still under debate and consists of either perioperative chemotherapy or neoadjuvant chemoradiotherapy followed by surgery. In patients not suitable for surgery, definitive radiochemotherapy is considered the treatment of choice. Modern radiotherapy in esophageal cancer is increasingly conformal and the dose at organs-at-risk could be reduced over the years to lower the rate of treatment-related side effects. Individualization of treatment and new combinations of systemic agents are under investigation to improve treatment outcome.

Esophageal cancer is one of the ten most frequent tumors worldwide. Despite advances in the treatment over the past decades, outcome especially in locally advanced tumors remains poor with a 5-year survival rate of about 15–25%. A distinction between squamous cell carcinoma, which can mostly be found in the proximal part of the esophagus, and adenocarcinoma, which is predominantly located in the distal part or at the gastroesophageal junction, must be made. In Western countries, the incidence of adenocarcinoma of the esophagus and the gastroesophageal junction showed a marked increase over the past decades. For patients with limited disease (i.e., cT1-2 cN0 M0), surgery without perioperative treatment is standard of care. Nonsurgical approaches are indicated only in patients unwilling or unable to undergo surgery. By contrast, in patients with locally advanced tumors (i.e., cT3-4 or cN+ M0), perioperative treatment should be performed. This may consist of radiotherapy in combination with chemotherapy or chemotherapy alone, depending on histology, tumor stage, location of the tumor, performance status, age, and comorbidities. In patients unwilling or unfit for surgery, or for inoperable tumors, definitive radiochemotherapy is indicated. Over the past years, modern radiochemotherapy concepts became standard of care in neoadjuvant and definitive treatment settings.

For unresectable esophageal cancer (e.g., located in the upper third of the esophagus) and patients not suitable or unwilling to undergo surgery, definitive radiochemotherapy is the treatment of choice. Early studies already showed that concurrent radiochemotherapy is superior to radiotherapy alone in patients with carcinoma of the esophagus in terms of local tumor control, distant metastasis, and survival at the cost of increased side effects [9]. Since then, several trials with different chemotherapy agents concurrent to radiotherapy have been conducted, mainly on patients with squamous cell carcinomas. The 2014 French PRODIGE5/ACCORD17 trial was a randomized phase II/III trial aimed at assessing the efficacy and safety of the FOLFOX (folinic acid, fluorouracil, oxaliplatin) treatment regimen versus fluorouracil and cisplatin as part of chemoradiotherapy in 259 patients with localized esophageal cancer unsuitable for surgery. After a median follow-up of 25.3 months, median progression-free survival was 9.7 months in the FOLFOX group and 9.4 months in the fluorouracil and cisplatin group (p = 0.64; [10]).
Whether higher radiation doses result in higher tumor control rates is still an unresolved question. The INT 0123 phase III trial compared local and regional control, survival, and toxicity of combined modality therapy using high-dose (64.8 Gy) versus standard-dose (50.4 Gy) radiotherapy with concurrent fluorouracil and cisplatin for the treatment of patients with esophageal cancer. There was no significant difference in median survival (13.0 vs. 18.1 months), 2‑year survival (31% vs. 40%), or locoregional failure and locoregional persistence of disease (56% vs. 52%) between the high-dose and the standard-dose arm [11]. The PRODIGE26/CONCORDE trial is an ongoing randomized phase II/III trial to test concomitant chemoradiotherapy for patients with nonresectable esophageal cancer with and without dose escalation up to 66 Gy on the primary tumor as well as involved nodes using a 3D conformal technique combined with 40 Gy elective nodal irradiation on regional lymph nodes that harbor a risk of microscopic involvement of ≥20% [12]. In the ART DECO phase III trial, patients are randomized between the standard dose of 50.4 Gy in fractions of 1.8 Gy and the experimental arm of 50.4 Gy combined with a concomitant boost of 11.2 Gy to the primary tumor, leading to a total tumor dose of 61.6 Gy in daily fractions of 2.2 Gy. In both arms, chemotherapy consisting of paclitaxel 50 mg/m2 and carboplatin (AUC = 2) will be administered weekly as radiosensitizer [13].

In the neoadjuvant setting, 41.4–45 Gy is considered an adequate radiation dose [3]. The dose for definitive radiochemotherapy is more controversial, ranging from 50.4 Gy to over 60 Gy [11]. Today, highly conformal treatment techniques, such as intensity-modulated radiotherapy (IMRT) or volumetric arc therapy (VMAT), are standard of care in the treatment of esophageal cancer and offer the possibility of applying higher treatment doses while providing maximum protection of organs at risk, thereby reducing treatment-related side effects [14].

Acute side effects of radiotherapy include radiodermatitis, mucositis, odynophagia, dysphagia, fatigue, pneumonitis, or pericarditis. These are mostly temporary, and treatment is usually symptom-based. By contrast, late side effects are often chronic, and treatment is often difficult. These include fibrosis or hyperpigmentation of the skin, pulmonary fibrosis, esophageal stricture or perforation, and myelopathy. Chemotherapy-related adverse effects depend on the substances used and include fatigue, nausea, vomiting, myelosuppression, or peripheral neuropathy. Importantly, concurrent chemotherapy may amplify radiotherapy-related side effects and vice versa.
Anzeige

E. Mayer, C.R. Arnold, U. Ganswindt, and R. Jäger declare that they have no competing interests.
Open Access This article is distributed under the terms of the Creative Commons Attribution 4.0 International License (http://​creativecommons.​org/​licenses/​by/​4.​0/​), which permits unrestricted use, distribution, and reproduction in any medium, provided you give appropriate credit to the original author(s) and the source, provide a link to the Creative Commons license, and indicate if changes were made.
Vorheriger Artikel Therapeutic endoscopic strategies in early esophageal cancer and dysplastic Barrett’s epithelium
Nächster Artikel Surgical concepts in esophageal cancer
insite
INHALT
download
DOWNLOAD
share
TEILEN
print
DRUCKEN 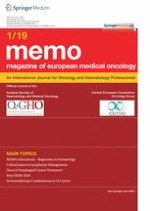 Progress in the multidisciplinary management of esophageal cancer: what are the latest developments?

Demystification of palliative care. In regard to Masel and Kreye