To determine how fast rheumatoid arthritis (RA) was diagnosed in a group of patients in a rural area and whether medical care and patient satisfaction were adequate in a predominantly non-urban settlement.

When visiting their rheumatologist, patients with RA were asked to complete a questionnaire at home after the consultation and then return it to an independent opinion research centre, where the data were collected and analysed. The form comprised various areas, namely demography, aspects of the diagnosis, medical care, therapeutic measures and the illness in a personal context.

Of 150 patients, 127 answered the questionnaire. A total of 63 % of the patients lived in settlements of less than 5,000 inhabitants, and a further 18 % in settlements of more than 5,000–50,000 inhabitants. The rheumatologist attended could be reached within 1 h for 90 % of the patients.
In slightly fewer than 30 % of the respondents, the diagnosis of RA was made within 3 months, and in 44%, within 6 months. In 75 %, the diagnosis was made by a rheumatologist. After experiencing the first symptoms, 80 % of the respondents contacted their general practitioner. A high degree of satisfaction appears to originate from the information supplied by the rheumatologist attended. Most patients believed they were involved in decision making regarding their therapy.

The majority of the respondents came from rural areas. RA was diagnosed within 6 months for almost half of the patients questioned. Most patients believed they were well informed and involved in therapeutic decision making.
Anzeige
Vorheriger Artikel Differences of frequency in administration of ranibizumab and bevacizumab in patients with neovascular AMD
Nächster Artikel Comparison of safety, efficacy and tolerability of Dexibuprofen and Ibuprofen in the treatment of osteoarthritis of the hip or knee 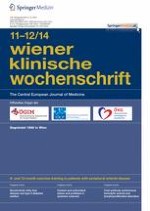 Is a complete blood cell count useful in determining the prognosis of pulmonary embolism?