The current study aimed to monitor psychological changes in young people (YP) with anorexia nervosa (AN) during a specialist inpatient treatment in order to explore possible predictors of an optimal length of stay. Outcome measures were analysed to determine if significant changes occur earlier or later on during the treatment.

Psychological changes occur at different stages of treatment. Although it was difficult to determine what factors may predict the length of stay from the variables explored, it was observed that a lower weight at admission impacted negatively on the improvement of ED and anxiety symptoms, which may lead to stay in treatment for longer. Also, higher levels of compulsive exercise and depression were associated to worse outcomes.
Level IV: Evidence obtained from multiple time series with or without the intervention, such as case studies. Dramatic results in uncontrolled trials might also be regarded as this type of evidence.
Anzeige
Vorheriger Artikel Zur Komorbidität von Posttraumatischer Belastungsstörung und Sucht in biopsychosozialer Perspektive
Nächster Artikel Integrating home treatment into the Austrian child and adolescent mental health care system: an implementation science perspective 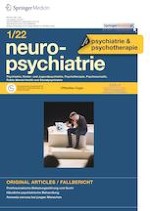