Patients who underwent esophagectomy at Huashan Hospital, Fudan University, between October 1, 2003, and December 31, 2008, were reviewed. Survival data and clinicopathological characteristics were collected.

Our finding revealed that the ratio and the number, but not the site, of metastatic lymph nodes were independent prognostic risk factors in esophageal squamous cell carcinomas. We suggest taking these factors into consideration for better estimation of prognosis. 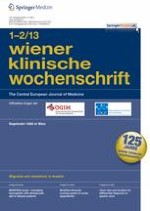 Concomitant use of beta-1 adrenoreceptor blocker and norepinephrine in patients with septic shock. A letter to the authors