We have investigated the probability of sustained treatment-free remission after steroid induction to facilitate clinical decision making regarding timing and necessity of second-line treatments. Response data from 31 patients with primary WAIHA initially treated with steroids were retrospectively analyzed. All patients responded by achieving a hemoglobin of at least 10 mg/dl.

After steroid tapering and final withdrawal, 9 of 30 patients remained in unsustained complete remission (CR). The probability of remaining in CR after steroid treatment only was 38.2вҖү% (2 SD 20.6вҖү%) at 15 months. The median remission duration was 100вҖү+ months with a range of 12вҖү+ to 163вҖү+ months. Of note, none of the remaining patients still on steroids achieved CR beyond 15вҖү+ months.

These data indicate that a considerable proportion of patients do not need further treatment and that relapses will not occur after 15 months in CR.
Anzeige
Vorheriger Artikel Bioethics internationally and in Austria
NГӨchster Artikel Results of a prospective dose intensity and neutropenia prophylaxis evaluation programme (DIEPP) in cancer patients at risk of febrile neutropenia due to myelosuppressive chemotherapy 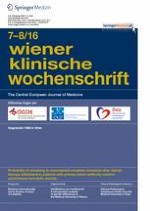 Bioethics internationally and in Austria

Habilitations as a bottleneck? A retrospective analysis of gender differences at the Medical University of Vienna