Many studies have investigated preexistent renal disease during pregnancy. However, insufficient data regarding the new onset of glomerulonephritis in the course of gestation, especially in patients with preeclampsia, exist. The aim of this study was to investigate underlying renal disease in preeclamptic Turkish women with persistent proteinuria after delivery.

Between 2005 and 2010, 463 patients with preeclampsia were admitted to our hospital. The symptoms of proteinuria persisted in 34 women (0.7 %). Thirteen of these patients refused a kidney biopsy. Seven of these patients had a history of documented kidney disease. Kidney biopsies were performed on 14 women who were diagnosed with persistent proteinuria in the postpartum period and the specimens were examined by light and immunofluorescence microscopy.

Persistent proteinuria is the most important predictor of underlying renal disease after delivery. All patients with preeclampsia should be evaluated with respect to continuing proteinuria, persistent hematuria, or impaired renal functions after postpartum period and a percutaneous renal biopsy should be performed in those patients who have positive signs of underlying renal disease. 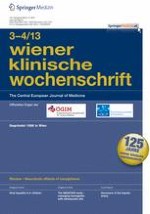 Clinical and laboratory features of viral hepatitis A in children