The Austrian pollen information service distributes pollen forecasts and offers various options (webpages, a mobile “Pollen” app, interviews for newspapers, radio, TV and information for the press agency) to support and inform pollen allergy sufferers in Austria in the best way to help to avoid their allergen. These services are well received and user numbers have increased, especially in recent years.

Herein, we unravel for the first time the user pattern over time on a monthly basis and compare it to the major pollen seasons in Austria as well as to the allergic burden.

The symptom load conforms to the web page user numbers and shows the same peaks from the study period of 2012 until 2014. The highest impact in user numbers and allergy burden occurred during the birch pollen season, although similar values were approached during the grass pollen season in 2014. Pollen loads during the respective pollen seasons of birch, grasses and herbs (mugwort and ragweed) mirrored the pattern as well, although to a minor extent, because different plant taxa have a different distribution within Austria and produce different amounts of pollen.

This study provides evidence that pollen information consumption can be seen as an indicator of the burden of pollen allergy sufferers as well as an indicator of the main flowering periods of the main plants inducing pollen allergies in Austria.
Anzeige
Vorheriger Artikel Effects of dilatation types during percutaneous nephrolithotomy for less radiation exposure: a matched-pair pilot study
Nächster Artikel First report of an outbreak of pneumonia caused by Streptococcus pneumoniae serotype 6A 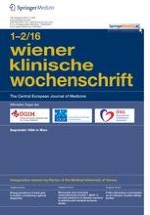 MUW researcher of the month, Dezember 2015