Sounds and acoustic stimuli can have an effect on human beings. In medical care, sounds are often used as parts of therapies, e. g., in different types of music therapies. Also, human speech greatly affects the mental status. Although calming sounds and music are widely established in the medical field, clear evidence for the effect of sounds in palliative care is scare, and data about effects of the human voice in general are still missing. Thus, the aim of this study was to evaluate the effects of different voice stimuli on palliative patients.

Although our dataset is heterogeneous, it can be concluded that voice stimuli can influence conscious patients. However, in this setting, no effect on unconscious patients was demonstrated. More clinical research on this topic with larger groups and a broader spectrum of parameters is needed.
Anzeige
Vorheriger Artikel Erschwerte Indikationsstellung zum Herzklappenersatz bei langjähriger Non-Adhärenz
Nächster Artikel Letter to the Editor 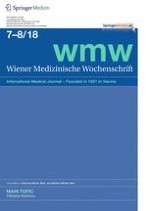