The PX-104 is an oral non-steroidal agonist for the farnesoid X receptor (FXR), a key regulator of bile acid (BA), glucose and lipid homeostasis.

A significant decrease in ALT (p = 0.027; 1‑tailed) and GGT (p = 0.019) was observed, without changes in serum alkaline phosphatase or serum lipids. Insulin sensitivity improved in 92% of patients (p = 0.02). However, hepatic steatosis measured by PDFF-MRI, 1H‑MRS and CAP besides extended serum lipoprotein and BA profiles did not change. NADPH/γATP ratios at 31P‑MRS significantly decreased (p = 0.022) possibly reflecting reduced hepatic inflammatory stress, but SPIO-MRI remained unchanged. Reduced preponderance of Coriobacteriaceae (p = 0.036) correlated with a relative reduction of total fecal BAs. There were no serious adverse events but short intervals of cardiac arrhythmia recorded in 2 patients led to termination of the study.

Non-alcoholic fatty liver disease (NAFLD) and especially non-alcoholic steatohepatitis (NASH) are associated with a higher risk of progression to liver fibrosis, cirrhosis and hepatocellular carcinoma [1‐3]. So far, no drug has been approved for the treatment of NAFLD and NASH [4]. The NASH is characterized by metabolic disturbances [5, 6] combined with hepatic inflammation and apoptosis [7, 8] as well as changes in gut microbiota and bile acid metabolism [9, 10]. An efficacious treatment option that simultaneously targets several pathophysiological aspects is still lacking. Nuclear receptors (NR) such as the farnesoid X receptor (FXR) are important regulators of key mechanisms in hepatic lipid and glucose metabolism as well as bile acid (BA) homeostasis, inflammation, fibrogenesis and gut integrity [11].
Upon activation by endogenous BAs or synthetic agonists FXR initiates transcriptional programs regulating BA, glucose and lipid homeostasis [11, 12]. Beyond these metabolic effects, activated FXR facilitates liver regeneration, exerts anti-inflammatory mechanisms, maintains gut mucosal integrity and improves intestinal antibacterial barrier functions, reduces intrahepatic resistance and thereby portal pressure [13, 14]. The first clinically available FXR agonist obeticholic acid (OCA) improved liver enzymes and insulin sensitivity in patients with NAFLD and type II diabetes [15], with a significant histological improvement of NASH and a reduction of liver fibrosis in the consecutive phase IIb trial [16]. Cilofexor [17], another FXR agonist, showed a significant reduction in hepatic steatosis, liver biochemistry, and serum bile acids in patients with NASH after 24 weeks of treatment. As a common side effect of FXR agonists, pruritus was more common in the treatment (14%) than the placebo (4%) group.
Anzeige
The PX-104 is an orally available, synthetic and non-steroidal high-affinity FXR agonist, which—in contrast to OCA—does not undergo enterohepatic circulation. This phase IIa study was the first clinical study with PX-104 administered to NAFLD patients. The primary aim of this study was to evaluate the safety and tolerability of PX-104 and to assess the impact on liver enzymes and hepatic fat. Furthermore, the comprehensive exploratory design of this study aimed to assess the feasibility of the outlined clinical study protocol for the purpose of obtaining data to design and select meaningful multimodal endpoints for subsequent phase II trials in NAFLD patients.

In this study 21 patients were enrolled at the NAFLD outpatient clinic of the Medical University of Vienna (Fig. 1). All patients gave written informed consent to participate in this trial. All versions of the study protocol were approved by the ethics committees of the Medical University Vienna and the Vienna General Hospital Research Ethics Committee (1680/2013). This study is registered at the National Institutes of Health clinical database (clinicaltrials.gov NCT01999101).
×

Patients enrolled in the study were 18–70 years of age, had a BMI between 25 and 40 and were diagnosed with NAFLD fulfilling all of the following criteria: (1) NAFLD on liver biopsy within 2 years prior to study participation OR liver steatosis on any imaging (ultrasound, MRI, CT), (2) disturbed metabolic homeostasis based on impaired homeostatic model assessment for insulin resistance (HOMA-IR) >1, (3) ALT within or above the upper tertile of the upper limit of normal (ULN; ALT >45U/l for males, >35U/l for females) and/or GGT above ULN (GGT >55U/l for males, >38U/l for females), (4) steatosis >238 db/m at CAP at screening and (5) steatosis >10% equivalent to histology at 1H‑MRS at baseline. Exclusion criteria were other causes of liver diseases, history of any structural cardiac disease requiring treatment, any clinical findings in ECG at screening or other confounding conditions (Suppl 1).

This open-label phase IIa study was the first clinical study to assess safety and efficacy of PX-104 in NAFLD patients including the evaluation of the outlined procedures in an exploratory sense to plan and design consecutive clinical studies with FXR agonists. Patients were treated with 5 mg of PX-104 orally once daily for 4 weeks according to a previous multiple dose phase I study. The primary objective of this study was to evaluate the safety and tolerability of 5 mg PX-104. Secondary objectives were changes in (1) transaminases, gamma-glutamyl transferase (GGT) and alkaline phosphatase, (2) plasma lipids including serum cholesterol, triglycerides or changes in serum lipoprotein profiles, (3) hepatocellular lipid content and/or changes in liver cell metabolism assessed by 1H and 31P‑MR spectroscopy, (4) liver stiffness assessed by transient elastography (TE) including controlled attenuation parameter (CAP) validated against MRS, (5) oral glucose tolerance test (oGTT) and/or whole body insulin resistance measured by HOMA index and the clamp-like index (CLIX), (6) phagocytic function of Kupffer cells and possible microcirculatory changes in the liver assessed by supermagnetic iron oxide magnetic resonance imaging (SPIO-MRI) to investigate possible effects on the phagocytic function of Kupffer cells (KCs) and possible microcirculatory changes in the liver, (7) immunological parameters, such as CD3, CD4, CD8 and CD19 assessed by flow cytometry (fluorescence-activated cell sorting, FACS), (8) total BAs and/or BA profiles in serum and stool, including serum 7α-hydroxy-4-cholesten-3-one (C4) and fibroblast growth factor 19 (FGF-19), (9) microbiome analysis as well as (10) intestinal permeability by the sucrose-lactulose-mannitol (SLM) test.
Anzeige

Blood samples for hematology, clinical chemistry, coagulation parameters and serology were collected at screening, baseline and weekly until end of treatment and follow-up.

The OGTT with 75 g of glucose was performed on days −1 and 27 including glucose, insulin and C‑peptide concentrations at 0, 30, 60, 90 and 120 min. These data were used to calculate HOMA-IR and CLIX as described before [20, 21]. In short, CLIX is calculated by using serum creatinine, the AUC of plasma glucose and C‑peptide from OGTT (Suppl 2).

Bile acids were determined as unconjugated acids and as taurine and glycine conjugates using a high-resolution mass spectrometry method as described previously [28, 29] (Suppl 2). Serum FGF-19 and C4 were measured on baseline and day 28 at several time points.

Bacterial DNA from stool samples was extracted with the PowerLyzer PowerSoil DNA Isolation Kit (MO BIO Laboratories, Carlsbad, CA, USA) according to the manufacturer’s instructions. Bacterial 16S rRNA was amplified with the Mastermix 16s Complete PCR Kit (Molzym, Bremen, Germany). The PCR products were subjected to agarose gel electrophoresis and the band of the expected length (330nt) was excised from the gel and purified using the QiaQick (Qiagen, Hilden, Germany) gel extraction system. The DNA concentration of the final PCR product was measured by Picogreen fluorescence (Suppl 2).

Intestinal permeability was assessed by a triple sugar (sucrose–lactulose–mannitol; SLM) test, as previously validated and described in detail [30] (Suppl 2).

Safety and tolerability assessment were made by monitoring the subjects for adverse and serious adverse events and by interpreting the results of the ECGs (24 h-Holter and 12-lead ECG), various laboratory tests (changes in ALT/AST from baseline) and the subjects’ diaries.

The main analysis set of interest for evaluation of the primary objective (safety) was the safety population, which included all subjects who received at least one dose of the study drug. The outlined study was conducted as a safety pilot study for a consecutive confirmatory trial. Hence, a formal sample size calculation was not performed. It was anticipated that 12 patients suffering from NAFLD were included in this trial. The sample size was regarded as sufficient to obtain preliminary information about safety and efficacy of the study drug. All efficacy assessments (secondary objectives) aimed to assess the feasibility of the outlined study procedures as well as estimation of the effect size and variability of PX-104 treatment in NAFLD patients in an exploratory way.
For analyses and statistical calculations SPSS® 24.0 (IBM Corp., Chicago, IL, USA) was used. Comparison of continuous variables was calculated using the Student’s t‑test and summarized using the following descriptive statistics: number, mean, standard deviation (SD), minimum, lower quartile (if appropriate), median, upper quartile (if appropriate) and maximum.

Out of 12 patients 11 (92%) experienced at least 1 adverse event (AE). During the study 27 AE were documented. None of these AEs were classified as serious. The AEs were graded as mild (n = 26) to moderate (n = 1) and 50% of patients experienced at least 1 AE considered as possibly (33%) or probably (17%) related to the study medication. Possibly treatment related AEs >1 patients/AE were diarrhea and headache (n = 2). There was no case of itch or pruritus. In 4 patients ventricular extrasystoles (VES) determined by Holter ECG were shown. In two patients the events occurred at the screening visit, classified as screening failures. The relation of study medication to VES was classified as possibly for one patient (polymorphic VES, Lown class 3a), and probably for the second patient (polymorphic VES, Lown class 3a; one ventricular triplet). Subsequent cardiac evaluation by echocardiography revealed no structural cardiac disease in all 5 patients. There was no statistically significant change of QTc from baseline to day 28 recorded from any 12-lead ECG during this trial.

Hepatic lipid content measured with CAP and 1H‑MRS as well as liver stiffness in TE did not change during the treatment period. Nevertheless, hepatic fat fraction decreased in 75% of patients at PDFF-MRI, which was not significant (p = 0.126). Furthermore, saturation indices reflecting hepatic saturated, unsaturated and polyunsaturated fatty acids in 1H‑MRS remained unchanged; however, the NADPH/γATP ratio at 31P‑MRS significantly decreased from a mean of 0.15 ± 0.08 at baseline to 0.10 ± 0.16 at end of treatment (EOT) (p = 0.022). Moreover, a significant negative correlation was observed between decreasing levels of GGT and γATP/TP ratios (p = 0.033).

This study was sponsored by Phenex Pharmaceuticals.

S. Traussnigg, E. Halilbasic, H. Hofer, P. Munda, T. Stojakovic, G. Fauler, K. Kashofer, M. Krssak, and M. Wolzt declare that they have no competing interests. M. Trauner served as a consultant for Albireo, BiomX, Falk, Genfit, Gilead, Intercept, Janssen, MSD, Novartis, Phenex and Regulus and is a member of the speakers’ bureau of Falk, Gilead, Intercept MSD and Roche. He further received travel grants from AbbVie, Falk, Roche and Gilead and unrestricted research grants from Albireo, Cymabay, Falk, Intercept, MSD and Takeda. He is also co-inventor of a patent on the medical use of nor-UDCA filed by the Medical University of Graz.

All procedures performed in studies involving human participants or on human tissue were in accordance with the ethical standards of the institutional and/or national research committee and with the 1975 Helsinki declaration and its later amendments or comparable ethical standards. Informed consent was obtained from all patients for being included in the study.
Open Access This article is licensed under a Creative Commons Attribution 4.0 International License, which permits use, sharing, adaptation, distribution and reproduction in any medium or format, as long as you give appropriate credit to the original author(s) and the source, provide a link to the Creative Commons licence, and indicate if changes were made. The images or other third party material in this article are included in the article’s Creative Commons licence, unless indicated otherwise in a credit line to the material. If material is not included in the article’s Creative Commons licence and your intended use is not permitted by statutory regulation or exceeds the permitted use, you will need to obtain permission directly from the copyright holder. To view a copy of this licence, visit http://​creativecommons.​org/​licenses/​by/​4.​0/​. 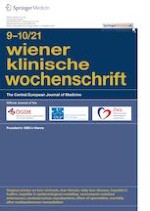