In his poem Gerontion (1920) Nobel laureate T.S. Eliot uses powerful language to give a fictional, highly condensed, first-person account of medical and psychological conditions that arise with old age: physical frailty, cognitive decline, sensory impairment, depressive symptoms with embitterment, social withdrawal and the psychological strain of having to face old age and make meaning of one’s life. Surprisingly, he wrote the poem as a young man.

In this qualitative study, we used a hermeneutic approach to interpret Gerontion from a psychiatric perspective. We considered how Gerontion could help us to further an empathic understanding of these mental states, why a young man expresses himself through the voice of an old man and how the depressed–aggressive tone of the poem with its contempt and anti-Semitism can be interpreted.

We concluded that Eliot was grappling with his identity as an American in England, as a sexually inhibited husband to a demanding wife, as a banker and poet and as someone who had witnessed the effects of WWI. Readers of the poem can simultaneously experience the suffering of an old man and the identity crisis of a young man. The poem can thus further insight into the development of contempt and promote empathy and professionalism in dealing with states such as late-life depression. Consequently it is well suited for use in medical classes on these issues, particularly because it is much shorter than a novel or film.
Anzeige
Vorheriger Artikel Kognitive Defizite beim Burnout-Syndrom – Ein Überblick
Nächster Artikel bericht aus dem ögpp-vorstand 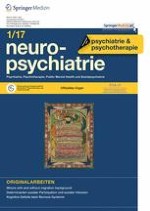 Psychiatric emergencies of minors with and without migration background