This trial was conducted to carry out an age and etiology-based analysis of the clinical efficacy of non-invasive ventilation (NIV) in acute hypercapnic respiratory failure (AHRF).

The efficacy of NIV was independent of age in patients aged ≥65 years with AHRF and NIV was most successful when the etiology of AHRF was COPD or ACPE. Dyspnea level, GCS, and APACHE-ΙΙ scores were independent predictors of NIV failure in COPD. 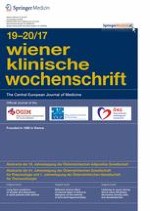