At the moment, targeted therapy in metastatic colorectal cancer (mCRC) is a hot topic which is widely discussed in the scientific community. Approximately 25 % of all CRC patients present with metastases at the time of initial diagnosis, and an additional 50 % of them will develop metastases during the subsequent course of their disease, contributing to the high mortality rates reported. Novel targeted agents like monoclonal antibodies directed against vascular endothelial growth factors or against epidermal growth factor receptor combined with chemotherapy as well as multikinase inhibitors (in the salvage setting) have demonstrated to result in improved therapeutic outcome in patients with mCRC. Recent research efforts have focused to define patient subpopulations, who benefit most from the respective treatments. KRAS mutations in codons 12 and 13 are found in approximately 40 % of all patients with mCRC. These clinicopathologic characteristics generate consecutive activation of the mitogen-activated protein kinase pathway. Less frequent activating KRAS mutations occur in codons 61 and 146, and there are the NRAS mutations in codons 12, 13, and 61. The gene expression profiles of the RAS genes help to define those patients who are most likely to benefit from certain biological agents. This review discusses the therapeutic options based on recent publications.
Anzeige
Vorheriger Artikel New targets in gastric cancer
Nächster Artikel Role of FDG-PET/CT in staging and first-line treatment of Hodgkin and aggressive B-cell lymphomas 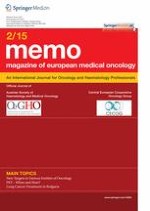 Potential impact of the hypomethylating agent 5-azacitidine on chronic lymphocytic leukemia with del(17)(p)/del(p53) and subsequent therapy-related acute myeloid leukemia without these aberrations: a case report

The role of positron emission tomography in breast cancer: a short review

PET/CT in management of oncologic patients

Cytomegalovirus retinitis in a child with lymphoblastic lymphoma