We analyzed the data of 422 patients referred to the Department of Neurology, Medical University of Vienna, for assessment of neurocognitive status. We also examined 110 of these patients in a follow-up with regard to stability of performance and disease progression. We compared VVT performance across diagnostic groups and explored associations with relevant sociodemographic and clinical variables. Predictive validity was assessed using receiver operator characteristic (ROC) curves and multinomial logistic regression analyses.

We found that most diagnostic groups differed significantly regarding VVT scores. These were shown to reliably identify cases suffering from visuo-constructive impairment but were not sufficient for classification into all diagnostic groups. Progression to more advanced disease stages could not be reliably predicted using VVT scores, possibly because subsamples of progressors were quite small.

VVT scores are useful indicators for identifying visuo-constructive impairment but are limited by factors such as similar disease manifestations when used to discriminate between several diagnostic groups. The same factors complicate the use of VVT scores for predicting disease progression to more advanced stages. 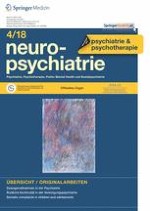 Somatic complaints in children and adolescents with social anxiety disorder