Age-related macular degeneration (AMD) is the leading cause of blindness in patients over 50 years of age in developed countries. It is estimated that the projected number of people with AMD will be 196 million worldwide by the year 2020, increasing to 288 million by 2040. Of these patients, 10–20% suffering from the fast progressing neovascular form of the disease (nAMD) account for 90% of all cases of severe vision loss. In fact, AMD is responsible for 8.7% of all cases of blindness worldwide. These numbers indicate the substantial burden of the disease. The WHO estimates that 246 million people worldwide currently have low vision and 39 million are blind. A literature (Medline) and Internet research was performed to better understand the prevalence of AMD and how health care could be prepared to cope with it in the future. In 2015, there were 90,010 intravitreal injections (IVI) in Austrian hospitals and primary care units. In 2016, this number rose to >100,000 IVI as the applications increase by approx. 15–20% every year. Since health insurances do not refund IVI in primary care, these services are channeled toward clinical wards, causing overcrowded waiting rooms and dissatisfied patients. Despite this high number of IVI in Austria, real-life data show that the number of IVI given today is not sufficient to keep visual acuity on a steady level. Therefore, new and long-acting treatment options are needed to end the burden for clinics and patients and to increase treatment efficiency by simplified protocols. Herein, a potential new gene-therapeutic approach using nonviral vectors and somatic pigment epithelial cells to overcome the imbalance of pigment epithelium-derived factor and vascular endothelial growth factor in nAMD is described. 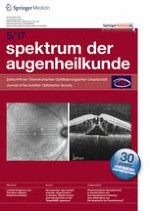