We report on two cases of necrotizing fasciitis of the lower leg due to nontoxigenic Vibrio cholerae (V. cholerae). A 73-year-old woman (case 1) and an 80-year-old man (case 2) were hospitalized with symptoms of necrotizing fasciitis on July 18 and August 15, 2015, respectively. In both cases, symptoms started the day after swimming in local ponds. Swabs gained intraoperatively and a blood culture from the male patient, yielded V. cholerae non-O1/non-O139, negative for cholera toxin gene ctx and positive for hemolysin genes hlyA and hlyB. Water samples taken from pond A on August 17, 2015 (32 days after exposure of case 1) and from pond B on August 20, 2015 (7 days after exposure of case 2) yielded non-O1/non-O139 V. cholerae in most-probable numbers of > 11,000 per 100 ml each. The occurrence of two cases of necrotizing fasciitis within a 1 month period related to two Austrian non-saline bathing waters, previously not known to harbor V. cholerae, is probably linked to the prevailing extreme weather conditions (heat wave, drought) this summer in Austria. While case 1 was discharged in good clinical condition after 73 days, case 2 died after four months of hospitalization. Public health authorities are challenged to assess the effects of long-term climate change on pathogen growth and survival in continental bodies of fresh water. 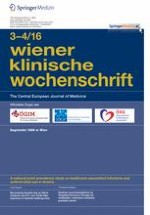 Coexistence of the POEMS syndrome with hepatitis B: a rare case report