Seroma formation is the major morbidity nuisance after breast cancer surgery. It prolonges hospital stay and causes infections and wound healing problems. The aim of the study was to evaluate the impact of the vessel sealing device LigaSure™ on postoperative morbidity especially seroma formation.

Between 2011 and 2012, data were retrospectively evaluated from 59 women with breast cancer who underwent axillary dissection at a university hospital. The Clavien Dindo Classification (CDC) was used to assess the severity of postoperative complications. Surgery was performed with LigaSure™ in 23 patients (39.0 %) compared with monopolar electrocautery in the control group.

A total of 36 patients (61.0 %) had breast conserving surgery, and 5 patients (8.5 %) underwent isolated axillary dissection. Morbidity-associated re-operations were reported in 5.1 %. Seroma rates were nearly twice as high in the control group compared with LigaSure™ patients (p = 0.056). Hospital stay was shortened by 1 day using LigaSure™. The rate of punctures at the outpatient ward was half as high in the LigaSure™ cohort (21.7 vs. 41.7 %; p = 0.115). The frequency of aspirations (≤ 2 times) was lower in LigaSure™ patients. Despite this, the median puncture volume was higher (195 ml; IQR: 112.5–265 ml) in the LigaSure™ cohort as compared with the control group (100 ml; IQR: 60–180 ml). Overall, the CDC was significantly lower in the LigaSure™ group compared with the conventional cohort (p = 0.038).

The vessel sealing device LigaSure™ leads to a reduction of postoperative morbidity, hospital stay, and puncture frequency, which is desirable in terms of cost-effectiveness. 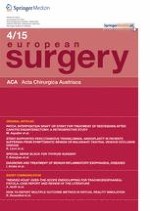 “Rendez-vous” over-the-scope endoclipping for tracheoesophageal fistula: case report and review of the literature

Is there: surgery goes inter- and multidisciplinary

Patch, interposition graft or stent for treatment of restenosis after carotid endarterectomy: a retrospective study

How to report multiple outcome metrics in virtual reality simulation