» Zum Volltext PDF-Version jetzt herunterladen
Wichtige Hinweise
All authors meet the criteria for authorship as set forth in the Consensus Statement on Journal Authorship. Potential conflicts of interest or financial ties are stated further below.

The minimally invasive esophagectomy (MIE) for esophageal cancer was introduced assuming a reduction of morbidity and operation time. After implementation of MIE at our institution, a randomized controlled trial was designed.

This study shows that hybrid MIE is a feasible alternative for esophageal resection. Morbidity, mortality, and oncological long-term results were equal in both groups, but the interpretation has to be done carefully due to premature termination of the trial. Interrupting a trial because of patient benefit should not be a reason to discard results but rather to improve technical aspects and strive for novel studies. 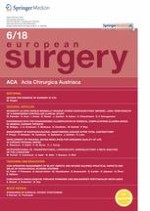