To evaluate the method of introduction, feasibility, and early results of a laparoscopic surgery for benign foregut disorders in a single high volume center.

Overall, 200 consecutive patients were enrolled in the study. GERD and achalasia were the most common indications for laparoscopic surgery, with 81 and 72 patients respectively. Due to giant hiatal hernia, 37 patients were operated on, while the rest were less common indications. There were no conversions to open procedures. In three patients, pneumothorax resulted from intraoperative pleural lesion. One mucosal perforation occurred in an achalasia patient. One reoperation was conducted due to excessive port site bleeding. Short term follow-up results are highly satisfactory, and are presented in detail for every patient group.

Introduction of laparoscopy in a foregut surgery high volume center for the treatment of benign foregut disorders can be obtained with low incidence of complications, and satisfactory short term functional results. 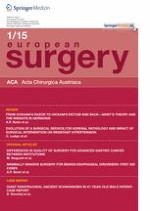 Differences in quality of surgery for advanced gastric cancer between institutions

For the beauty of our globe