Malignant pleural mesothelioma is a rare malignant disease that in the majority of cases is associated with asbestos exposure. The incidence in Europe is about 20 per million inhabitants and it is increasing worldwide. Initial symptoms are shortness of breath, pleural effusion, cough, and chest pain. The typical growth pattern is along the pleural surface; however, infiltration of the lung and/or mediastinal and chest wall structures can occur in a more advanced stage. Ultimately, distant metastases outside the chest can result. Several histological subtypes of pleural mesothelioma exist, which must be differentiated from either benign diseases or metastases in the pleural space by other tumor entities. This differential diagnosis can be very difficult and a large panel of immunohistochemical markers is required to establish the exact diagnosis. The standard procedure for confirming the disease and obtaining sufficient tissue for the diagnosis is videothoracoscopy. Full thickness biopsies are required, while transthoracic needle puncture of pleural fluid or tissue is considered to be insufficient for a cytological diagnosis. Complete and detailed staging is mandatory for categorization of the disease as well as for therapeutic decision making.
Hinweise
All authors contribute on behalf of the Austrian Mesothelioma Interest Group (AMIG).

Asbestos exposure is the main risk factor for the development of malignant pleural mesothelioma (MPM) [1]. Asbestos comprises silicate minerals with very thin fibers: chrysotile, crocidolite as serpentines, amosite, anthophyllite, tremolite, and actinolite from the amphibole group [2]. Chrysotile is biologically active and detectable in the lungs for a shorter time. Chrysotile, amosite, and crocidolite were mined and used in ship and railway construction as well as in fire protection engineering. The first evidence of their high carcinogenic potential was found in the UK and South Africa as early as the 1960s [3]. Amosite and crocidolite seem to have a higher carcinogenicity than the other types of asbestos [2]. Asbestos exposure is typically labor-dependent and is recognized as an occupational disease. More recently, a shift has been observed from asbestos-removal workers to professionals involved in post-construction work, e. g., electricians, plumbers, or heat protection technicians. This is paralleled by a profession-dependent gender distribution, as more than 80 % of affected individuals are men [4].
“Environmental” occurrence of mesothelioma has been found in people growing up in the vicinity of natural asbestos resources (Turkey, Corsica, Cyprus) or in areas where asbestos was used for the whitening of house walls. The load in rooms built with asbestos-containing materials was initially seen as hazardous. The actual resulting asbestos dose is, however, extremely low and carcinogenic levels are not detectable [5].
Anzeige
Furthermore, there is an increasing incidence of nonoccupational asbestos disease among housewives and family members of asbestos workers as well as a high environmental impact in the vicinity of mining and processing facilities [6, 7].
There is a clear correlation between the amount of asbestos exposure and the incidence of MPM. The mean latency period between exposure to asbestos and the onset of symptoms is up to 40 years, and 99 % of cases show a latency of more than 15 years [8].
The occurrence of MPM is independent of other asbestos-associated diseases such as classic asbestosis of the lung (interstitial lung disease with fibrosis) and benign pleural plaques. Although pleural plaques are also associated with asbestos exposure, studies from Australia could not find any connection between plaques and an increased incidence of MPM [9].
The incidence of MPM varies between 7 per million inhabitants in Japan and 40 per million in Australia. In Europe, the average incidence is 20 per million inhabitants. The frequency is highly dependent on the amount of asbestos removal, asbestos import, and industrialization. In Europe, peak incidence is to be expected between 2015 and 2020 due to the long latency period [10].
Anzeige
By contrast, the incidence of mesothelioma without asbestos contact is extremely low (<1: 1 million). Other potential cofactors for the development of mesothelioma besides asbestos are synthetic materials (ceramics, nanoparticles), ionizing radiation, and SV-40 virus infections [11].
The impact of cigarette smoke as well as numerous other fibrous materials such as glass fibers and mineral glass wool is, however, excluded. Genetic factors may play a role, since both familial clustering and endemic accumulation in populations with high natural exposure are known in Turkey [5, 12].
In Austria, there have been 276 cases of MPM approved by the AUVA (Allgemeine Unfallversicherungsanstalt – General accident insurance company) as being caused occupationally within the last 5 years. Of these, 53 were approved in 2014 only. In contrast to this, ten asbestos-related MPM cases were documented in 1995 and 41 in 2005. However, there is still uncertainty about the number of MPM cases not being reported to the AUVA. A comparison of the incidence of MPM worldwide and in Austria is depicted in Fig. 1.
×

In the current European Society of Thoracic Surgery (ESTS)/European Respiratory Society (ERS) guidelines no general screening methods are recommended [13]. This is based on the low sensitivity of even advanced imaging techniques such as low-dose computed tomography (CT) in screening of asbestos workers.
Circulating biomarkers, such as osteopontin, mesothelin-related peptides, and soluble mesothelin-related peptide (SMRP) [14], and fibulin-3 [15] have also been evaluated in MPM extensively. However, none of them are considered to be a reliable screening tool, since false-positive results are too frequent [16].

Specific symptoms of MPM are dyspnea, cough, and chest pain on initial examination. Shortness of breath is often initially caused by a pleural effusion and later by extensive restriction due to pleural and pulmonary tumor masses in the thoracic cavity. Patients describe chest pain as diffuse, sometimes radiating into the shoulders, arms, or abdomen. Tumor ingrowth into the neural structures of the brachial plexus and the intercostal or paravertebral structures can also cause neuropathic pain. Weight loss is a symptom of more advanced disease.
Typically, MPM occurs initially unilaterally. The tumor can, however, spread to the other pleural cavity or into the peritoneum in the further course of disease. Compared with lung cancer, distant metastases in the extrathoracic lymph nodes or in other parenchymal organs are usually rare, although they do occur in very advanced stages [17].

The typical finding on chest X‑rays of patients with MPM is pleural effusion or pleural thickening, which, however, is not specific. CT scan (Fig. 2) is more helpful, but it still does not allow a definitive diagnosis to be made since its sensitivity reaches only 40 %, and in most cases it does not distinguish between benign and malignant processes. The same holds true for positron emission tomography (PET)-CT where no clear standardized uptake value (SUV) level is considered suggestive for MPM and false-positive results can occur in other processes such as tuberculosis, parapneumonic effusions, and uremia [18].
×
Anzeige
Puncture of the pleural effusion that is usually present and cytological examination of the fluid is also not conclusive, especially since the differential diagnosis with pleural metastases of other tumors such as bronchial or breast cancer (e. g., adenocarcinomas) cannot be made in most cases. Also the macroscopic aspect of MPM is so variable that simple thoracoscopy does not confirm the diagnosis.
For these reasons, the precise diagnosis of MPM requires a histopathological confirmation and thoracoscopy remains the standard procedure for obtaining tissue and performing macroscopic staging of the pleural tumor spread at the same time (Fig. 3). Thoracoscopy can be performed with the patient under local anesthesia or as video thoracoscopy via a surgical approach. This allows one to combine the diagnostic procedure with the initial therapeutic step of talc pleurodesis (Fig. 3). Only in exceptional situations should a CT- or ultrasound-guided fine needle biopsy be performed, which, however, has a a clearly lower sensitivity.
×
The typical diagnostic algorithm applied in most centers around the world is displayed in Fig. 4.
×

MPM derives from the pleural stem cell, which exhibits epithelioid and sarcomatoid growing patterns at the same time. Depending on which component is predominant, three histological types of MPM can be distinguished: epithelioid (50–70 %), sarcomatoid (7–20 %), and a mixed or biphasic form (20–35 %; Table 1 and Fig. 5).
Table 1
Histological specification of malignant pleural mesothelioma [23]
×
The pathological diagnosis and differential diagnosis of MPM can be very challenging. In a French study, the initial diagnosis of MPM was revised as false positive in 13 % of cases [19]. This can be explained in part by the fact that MPM can present in very heterogeneous forms on the one hand and must be distinguished from benign processes and other tumors, especially metastases of various tumor entities, on the other hand. Such a differential diagnosis can be particularly difficult since mesothelioma-like features can also be found in some lymphomas, thymomas, and carcinomas, etc.
Full-thickness biopsies are required to separate invasive from noninvasive growth patterns and a panel of numerous immunohistochemical markers is required for the differentiation of epithelioid MPM from adenocarcinoma [13].

Both CT and PET-CT (Fig. 6), however, are useful for the further staging.
×
For all patients, the following assessments for staging and further treatment are required: After initial imaging with CT scan and confirmation of disease via video-assisted thoracic surgery (VATS), a potential candidate for surgical treatment should undergo PET-CT scanning to rule out distant metastasis and involvement of the abdomen and the mediastinal lymph nodes. To rule out the latter, histological confirmation has to be made either by endobronchial/endo-esophageal ultrasonography and transbronchial needle aspiration (EBUS/EUS-TBNA) or mediastinoscopy or VATS according to the lymph node station involvement and the involved side.
Anzeige
If nodes are negative, patients can proceed to induction treatment and should be re-staged with CT or PET-CT. In some cases of unclear involvement of adjacent structures (e. g., chest wall), magnetic resonance imaging (MRI) can be added in order to judge the resectability.
The investigations shown in Table 2 were recommended by many consensus groups.
The most recent available and widely used TNM-based stating system was developed by the International Mesothelioma Interest Group (IMIG) and was also approved by the Union for International Cancer Control (UICC; Tables 3 and 4).
A possible staging algorithm for MPM patients is displayed in Fig. 4.
Table 2
Clinical approach and pretherapeutic evaluation according to ERS/ESTS recommendations [13]
CT computer tomography, MRI magnetic resonance imaging
Table 3
TNM staging of malignant pleural mesothelioma [24]
Table 4
UICC–IMIG staging [24]

The prognosis for MPM depends on the patient’s age, gender, tumor stage, and geographic region [20]. Other factors such as weight loss and performance status are important for the prognosis as in other tumor entities as well as quality of life and symptom scores. Epithelioid MPM has a better overall prognosis than non-epithelioid histological subtypes. Low hemoglobin levels, high platelet levels, and high serum lactat dehydrogenase (LDH) are prognostically unfavorable characteristics [21]. Numerous new laboratory markers are in evaluation, but no validated data on their prognostic value are available yet [22].

The publication has not been funded by any pharmaceutical company.
Open access funding provided by Medical University of Vienna. 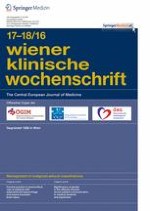 The relationship between visfatin, liver inflammation, and acute phase reactants in chronic viral hepatitis B