In 2008 the Ludwig Boltzmann Cluster Oncology (LBC ONC) was established on the basis of two previous Ludwig Boltzmann Institutes working in the field of hematology and cancer research. The general aim of the LBC ONC is to improve treatment of hematopoietic neoplasms by eradicating cancer-initiating and disease-propagating cells, also known as leukemic stem cells (LSC) in the context of leukemia. In a first phase, the LBC ONC characterized the phenotype and molecular aberration profiles of LSC in various malignancies. The LSC phenotypes were established in acute and chronic myeloid leukemia, in acute lymphoblastic leukemia and in chronic lymphocytic leukemia. In addition, the concept of preleukemic (premalignant) neoplastic stem cells (pre-L-NSC) was coined by the LBC ONC and was tested in myelodysplastic syndromes and myeloproliferative neoplasms. Phenotypic characterization of LSC provided a solid basis for their purification and for the characterization of specific target expression profiles. In a second phase, molecular markers and targets were validated. This second phase is ongoing and should result in the development of new diagnostics parameters and novel, more effective, LSC-eradicating, treatment strategies; however, many issues still remain to be solved, such as sub-clonal evolution, LSC niche interactions, immunologic control of LSC, and LSC resistance. In the forthcoming years, the LBC ONC will concentrate on developing LSC-eradicating strategies, with special focus on LSC resistance, precision medicine and translation of LSC-eradicating concepts into clinical application. 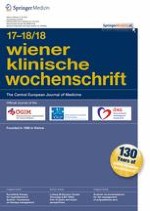 Ruxolitinib therapy for myelofibrosis in Austria

Austrian recommendations for the management of polycythemia vera