During the San Antonio Breast Cancer Symposium in December 2016, the main topics were systemic treatment of breast cancer and molecular research. But several studies were also presented concerning local therapy: Surgical issues on evaluating resection margins, management of ductal carcinoma in situ (DCIS), surgical challenges after neoadjuvant therapy related to assessment of response or treatment of axillary lymph nodes, and studies about outcome after breast reconstruction and radiation therapy were discussed. In this short review, oral presentations of these topics are summarized.

In breast cancer patients undergoing breast-conserving surgery, clear margins are necessary to avoid local recurrence. In recent years, pathology and breast imaging have improved substantially and systemic therapy has also had a major impact on local control.
Before 2014, 50% of additional surgeries for no tumor on ink were performed to ensure wider margins as required by previous standard [1]. Therefore the SSO-ASTRO Consensus Guidelines was published for resection considering there is no need for wider margins other than “no tumor on ink” in invasive cancer [2‐4]. Monica Morrow presented data from the Memorial Sloan Kettering Cancer Center (MSKCC) in New York comparing re-excision rate before and after the publication of the guideline showing a significant reduction from 21 to 15% [5]. In addition, preliminary data pointed out the trend in surgical treatment of breast cancer in the years 2013–2015 of a 16% decrease of additional surgery after lumpectomy due to a decrease in the proportion of patients with negative margins having re-excision.
Anzeige
The overall increase in breast-conserving surgery of 13% reflected a decline in both uni- and bilateral mastectomy.

Radioactive seed localization for nonpalpable breast lesions is a promising new technique in breast cancer surgery [6]. Guided by ultrasound, a small titanium seed containing typically 1–10 MBq of radioactive iodine-125 is placed in the center of the nonpalpable breast lesion on the day before surgery. During the operation, the seed is located with a hand-held gamma probe. An interesting study presented by Linnea Langhans from Copenhagen compared radioactive localization versus wire-guided localization of nonpalpable invasive and in situ breast cancer in a Danish randomized multicenter controlled trial: There was no difference in procedure duration, pain, complications, or sentinel node identification rates. Moreover, the new technique was more convenient for patients and surgeons and highly preferred for localizing axillary nodes.

The National Comprehensive Cancer Network (NCCN) Guidelines 2016 [7] recommend that if patient and physician perceive individual risk as being low, some ductal carcinoma in situ (DCIS) patients may be treated with excision only, without radiotherapy. A group from Nashville, Tennessee, assessed the relationship between ipsilateral breast event risk and biological risk signature. This signature was developed from three cohorts in the US and Sweden integrating immunohistochemistry biomarkers and clinicopathological features of low and elevated risk DCIS patients to a continuous score. A total of 455 patients were included in the study; follow-up was 10.4 years. Ipsilateral local recurrence in the low-risk group treated with surgery only was 10% and 5% in the group surgery with radiation therapy, while in the elevated risk group it was 30% vs. 10%. These results were similar to studies conducted with the DCIS recurrence score. Two ongoing studies in Australia and Sweden will provide more information about the value of radiotherapy in DCIS in the near future.
Anzeige

Tari A. King from Harvard Medical School talked about the consequences of neoadjuvant chemotherapy (NCT) on breast cancer surgery, allowing breast conservation and reduced need for axillary node dissection by downstaging of the disease. On the basis of an interdisciplinary approach, accurate imaging tools for quantifying response are needed.
Comparing residual imaging tumor size to pathologic tumor size, magnetic resonance imaging sensitivity was 86–92%, specificity 60–86% with an accuracy of 90% [8].
Unfortunately increasing rates of pathologic complete regression after NCT have not translated into increasing rates of breast-conserving treatment yet; the causes may be multifactorial:

Sentinel and axillary dissection after NCT

Surgical management of breast cancer is changing due to effective systemic (neo)adjuvant therapy. There are new techniques to localize nonpalpable lesions, new guidelines regarding resection margins have lowered re-excision rates and targeted axillary dissection after good response to neoadjuvant chemotherapy, has been shown to be safe to avoid complete axillary dissection. After postmastectomy radiation therapy, autologous reconstruction has a better outcome.
Open access funding provided by Medical University of Vienna.
Anzeige 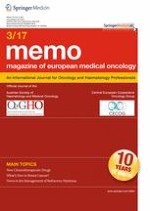