Primary graft failure in the early postoperative period after heart transplantation, remains a main cause of a poor outcome. Current treatment options include pharmacological (catecholamines and phosphodiesterase inhibitors) and mechanical assist device support. Pharmacological support with catecholamines is related to elevated myocardial oxygen consumption and regional hypoperfusion leading to organ damage. On the other hand, levosimendan, as a calcium-sensitizing agent increases cardiac contractility without altering intracellular Ca2+ levels and increase in oxygen demand.
We present a case of a 51-year-old man, who was suffering from acute right-heart failure in the early postoperative period after heart transplantation. As a rescue therapy at the late stage of a low cardiac output state, levosimendan was started as continuous infusion at 0.1 μg/kg/min for 12 h and thereafter, at 0.2 μg/kg/min for the following 36 h. Levosimendan demonstrated an advanced pharmacological option as was portrayed in this case, where the right ventricle was under a prolonged severe depression and acutely overloaded after heart transplantation. 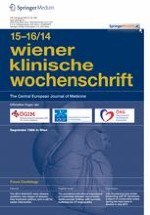 Life-threatening heat stroke presenting with ST elevations: a report of consecutive cases during the heat wave in Austria in July 2013

Evaluation of epicardial fat tissue thickness in patients with hyperthyroidism

The association of serum albumin with coronary slow flow