Arterial hypertension is a serious public health problem because of its frequency and poor management. We compared hypertension control between rural and urban environment over 5 years. Initial hypothesis: arterial pressure control is better in urban (Split) than in rural (Trilj) environment.

Historic prospective study was conducted in two family medicine outpatient clinics. Data for the years 2005, 2006, and 2010 were analyzed. One hundred and seventeen subjects diagnosed with arterial hypertension in 2005 were examined: 66 in a rural and 51 in urban outpatient clinic. Their average age was 60.92 ± 10.03 (range 30–82 years). Blood pressure records at the onset of the study, the first, and fifth year of treatment, risk factors, and therapy were analyzed. T-test and χ2-test were used in statistical data analysis.

In the urban clinic, more subjects were smokers, had positive family history, were overweight, and had registered hyperlipidemia. Initial mean arterial pressure readings were similar in both the clinics. Decrease was recorded in the following 5 years. During this study the use of ACE inhibitors (ACEI) (Split by 45 %, Trilj by 133 %) and calcium channel blockers (CCB) (Split by 76.9 %, Trilj by 525 %) was increased. The number of patients receiving monotherapy was reduced.

Better arterial pressure control was recorded in the urban clinic, where, after 5 years, despite increased frequency of additional risk factors, the number of normotensive patients was higher than that in the rural one. Hypertension control in both settings was still poor. Hypertensive patients should participate actively in the treatment. 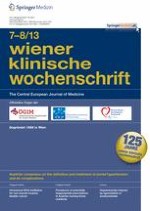 Erratum to: Thyroid hormone levels as a predictor of mortality in intensive care patients: a comparative prospective study

A variant of the median arcuate ligament syndrome: are sagittal images enough for diagnosis?