Intraoperative hyperthermic chemotherapy (HIPEC) is increasingly used in combination with cytoreductive surgery for the treatment of peritoneal carcinomatosis. The potential survival benefit of adjuvant HIPEC after curative gastrectomy has not been conclusively demonstrated. We describe a newly developed closed system for HIPEC and report the preliminary results of a pilot study.

Patients with locally advanced gastric carcinoma at a high risk for peritoneal recurrence were identified from a prospectively collected database. Laparoscopic total or subtotal gastrectomy combined with standard D2 lymphadenectomy was performed. Immediately after resection and 15 min before HIPEC treatment, intravenous induction chemotherapy with folinic acid and 5‑fluorouracil was administered. A closed-system HIPEC with turbulent-flow circuit (Combat PRS™, Peritoneum Recirculation System, Galmaz Biotech, Madrid, Spain) was used to perfuse the peritoneal cavity with a solution of oxaliplatin and glucose during 60 min. After washout of the peritoneal cavity and re-establishment of pneumoperitoneum, a Roux-en-Y esophagojejunostomy or gastrojejunostomy was performed. 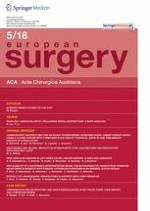 Efficacy of laparoscopic hepatectomy in patients with liver cirrhosis