To evaluate whether the presence of dacryolith is a predictive factor for successful endonasal dacryocystorhinostomy (EDCR), to present findings from morphological, chemical, and mineralogic analysis of dacryoliths.

The surgical results of patients with (group I) and without dacryoliths (group II) were compared 1 year post surgery. Dacryoliths were examined with atomic infrared spectrometry, amino acid analysis, and scanning electron microscopy.

A total of 771 EDCRs performed from 1994 to 2013 were evaluated. Dacryolith was found in 89/875 procedures (10.2 %). Complete improvement was achieved significantly more frequently in group I (89/89; 100.0 %) than in group II (714/785; 90.8 %; p < 0.001). EDCRs were performed more frequently in people aged 31–50. All the dacryoliths were soft, composed of organic material, including proteins and mucoproteins, with 20 % amino acid content. The stones were composed of lobes and lobules built on an amorphous core material with small cavities. The most frequent elements found in inorganic inclusions were silicon, magnesium, and sulfur.

The presence of dacroliths is a predictive factor for successful endonasal DCR. Dacryoliths are composed almost exclusively of organic material, including proteins and mucoproteins, with approximately 20 % amino acid content. 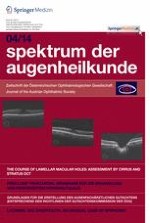 The course of lamellar macular holes: assessment by Cirrus and Stratus OCT