Philadelphia chromosome-negative myeloproliferative neoplasms (MPNs), including polycythemia vera (PV), essential thrombocythemia (ET), and primary myelofibrosis (PMF), are characterized by mutations in genes, such as JAK2V617F, JAK2 exon12 gene and MPL. With respect to MPN-associated subclasses, each of these disorders has a different allele burden during disease treatment. Up to now, several studies have been conducted on the relationship between allele burden with specific MPN-associated phenotypic features, prognosis and disease progression. It seems that finding such a correlation would be a great contribution to faster diagnosis and effective treatment. The goal of this review is to investigate the relationship between JAK2V617 allele burden with different MPN subtypes and their different phenotypes. Allele burden is closely associated with MPN phenotype and can partially indicate the prognosis, progression and even the likelihood of disease transformation.
Anzeige
Vorheriger Artikel APPLY: A prospective observational study of clinical practice patterns of darbepoetin alfa use in patients with chemotherapy-induced anemia in Romania
Nächster Artikel Pulmonary mass: never judge a book by its cover 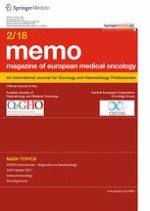