Familial Mediterranean fever (FMF) is an autosomal recessive disorder characterized by episodic, recurrent, self-limited attacks of fever and serositis (sterile peritonitis, pleuritis, arthritis, etc). The insufficiency in restriction of mild inflammation contributes this consequence in FMF.
Intrauterine devices (IUDs) have been widely used in the world for contraception by gynecologists as an effective and safe method. Herein, we present a woman with FMF as the first case, whose attacks were triggered by copper-containing IUD. Our hypothesis in the present case was that sterile mild inflammation in the uterus caused by copper-containing IUD may be the initial source of systemic inflammatory response.
In our opinion, clinicians should consider that the copper-containing IUDs may be another cause of FMF attacks in women using this contraceptive method.
Anzeige
Vorheriger Artikel Cerebral sinuvenous thrombosis: a rare complication of Lyme neuroborreliosis
Nächster Artikel Spinal subdural hematoma following lumbar decompressive surgery: a report of two cases 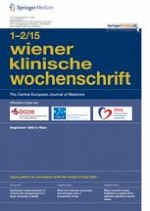