In reoperation for hemorrhage after thyroid surgery, the source of bleeding is frequently undetectable.

We report on a 70-year-old woman who required reoperation for postoperative hemorrhage after thyroidectomy for benign multinodular goiter. During the primary operation, one branch of the upper pole artery was cut accidentally and subsequently coagulated. No further bleeding was noted. During the operation, the patient was mainly hypotensive with a mean systolic blood pressure of 95 mmHg. In the recovery room, bleeding was noted after the blood pressure increased. During the reoperation, bleeding from the arterial upper pole stump was only identified after the blood pressure was increased by systemic administration of phenylephrine and etilefrine.

Pharmacological increase of systemic blood pressure can assist to identify sources of bleeding and may prevent postoperative hemorrhage. 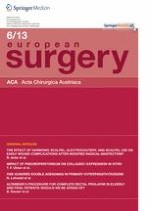 Altemeier’s procedure for complete rectal prolapse in elderly and frail patients: should we be afraid of?