Internal medicine in the United States and Germany: mutual influences from 1870 to today | springermedizin.at Skip to main content
SUCHE MENÜ 1 2 3 4

Over the past 140 years, the close academic and clinical interactions in Internal Medicine between German-speaking countries and the United States have been through three distinct stages. From 1870 until the First World War, German medical research, teaching, and university organization served as a model for U.S. medical schools and practice. However, after World War I, medical education reforms were implemented in the U.S., and due also to radical economic and political changes at home, German medicine lost its pioneering role. Furthermore, many scientists and clinicians were forced to emigrate in the face of racial and political persecution in Germany and Austria. Since the Second World War, American medicine has grown further to become the world leader in research, training, and clinical practice. The earlier trend of American physicians studying abroad was thus reversed, with many of today’s foremost German physicians completing clinical and research training in the United States.
Anzeige
Vorheriger Artikel Psychologische und psychoanalytische Grundlagen in Schrekers Musikdrama „Die Gezeichneten“
Nächster Artikel Daniel Bovet, Nobelist: muscle relaxants in anaesthesia 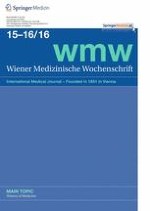 Description of in-hospital deaths in Vienna during 1850–2000